According to David Michaelis’ N. C. Wyeth: A Biography  it was 110 years ago today - October 25, 1902 - that Wyeth met Howard Pyle for the first time. Although Wyeth later convinced himself that the meeting happened on his 20th birthday (October 19th), his memory of it stuck with him. In an article he wrote for Christian Science Monitor of November 13, 1912 - just a year after Pyle's death - he described it this way:


A great stick of hickory is smoldering and gleaming fitfully in the fireplace before me. Its pungent fragrance scents the room. My pulse quickens to the magic aroma, and my thought flies back to a day in October 12 [sic 10] years ago when I first set eyes on Howard Pyle. He was standing, tall, broad and impressive, legs apart, hands clasped behind him, backed against another such open fire in his studio. The smell of burning hickory was in the air!

I had come to him, as many had before me, for his help and guidance, and his first words to me will forever ring in my ears as a vital symbol of his teaching and an unceasing appeal to my conscience.

“My boy, you have come here for help. If so, you are here to live your best, and to work hard!” His broad, kindly face looked solemn behind those words, and from that moment I knew that he meant infinitely more to me than a mere teacher of illustration. It was this commanding spirit of earnestness, and of love, that made his leadership distinctive, and which has perpetuated in the hearts of all his pupils a deep affection kindred to that which one holds toward his own parents....

In subsequent years, when asked to write about his teacher, Wyeth returned to this particular memory several times. Compare, for instance, the 1912 passage with this one from his introduction to Howard Pyle: A Chronicle of 1925:


A great stick of hickory is smoldering and gleaming in the fireplace before me. Its pungent fragrance scents the room. My pulse quickens to the magic aroma and my thought flies back to a day in October, eighteen [sic 23] years ago, when I first saw Howard Pyle. He was standing, tall, broad and impressive, legs apart, hands clasped behind him, backed against another such open fire in his studio. The smell of burning hickory was in the air.

I had come to him, as many had before me, for his help and guidance, and his first words to me will forever ring in my ears as an unceasing appeal to my conscience: “My boy, you have come here for help. Then you must live your best and work hard!” His broad, kindly face looked solemn as he spoke these words, and from that moment I knew that he meant infinitely more to me than a mere teacher of illustration. It was this commanding spirit of earnestness and of love that made his leadership distinctive, and which has perpetuated in the hearts of all his pupils a deep affection akin to that which one holds toward his own parents....

It’s remarkably similar, as are two other known variants of 1921 and 1925. But when Wyeth was asked to contribute an introduction (and a color frontispiece) to the “Brandywine Edition” of The Merry Adventures of Robin Hood in 1933 (which also featured illustrations by his teenaged son Andy) he expanded on his earlier reminiscences, infusing them with much more myth and magic. In many ways Wyeth’s words reflect the best of Pyle’s own prose, so here’s the bulk of them, in honor of the 110th anniversary:


My most vivid recollection of Howard Pyle was gained during the first five minutes I knew him. He stood with his back to the blazing and crackling logs in his studio fireplace, his legs spaced apart, his arms akimbo. His towering figure seemed to lift to greater heights with the swiftly ascending smoke and sparks from the hearth behind him.

It happened on one of those blue and gold days in October. The air was sharp and keen. Moreover, it was my birthday [sic]. I was young, ambitious and impressionable. For years, it seemed, I had dreamed of this meeting. Success in winning this master’s interest and sympathy to the cause of my own artistic advancement seemed so much to ask, so remote, such a vain hope. But here I was at last, seated before him in the very room in which were born so many of the pictures I had breathlessly admired from boyhood. Paintings and drawings that had long since become a living and indispensable part of my own life.

And as Howard Pyle stood there, talking gently but with unmistakable emphasis, his large and genial countenance hypnotized me. The mobile mask of his face became more than individual. My rapid reflections were swept beyond the actual man. It was bewildering. I heard every modulation of his voice and I took note of his every word. Occasionally I would answer a question. I remember all this clearly. But a searching beyond his countenance persisted.

The soft top-light from the glass roof high above us poured down like a magical and illuminated mist over his magnificent head. The forehead was broad, spatial, and not too high, the frontal processes accented the shadowed caverns of the large and wide-set eyes. The well-defined brows were tremulously sensitive. Lifting toward the centre they would become ineffably wistful, then quickly dropping to a level line across the eyes the entire countenance became majestically severe, forceful, unrelenting. The recollection of the masks of Beethoven, Washington, Goethe, Keats, passed in swift succession before my vision and in a sudden grasp of the truth I realized that the artist’s face before me was actually a living composite of the men of history and romance which he had so magically and dramatically perpetuated on canvas. It was as though there existed a definite and precise genealogical tie between this living, pulsating countenance before me and the thrilling pictures of the men he had created whether of General Washington, Captain Kidd, Aaron Burr, Robin Hood, Sir Launcelot or numberless others. In a sudden relaxation of expression, certain curves and areas of the face would vividly suggest the soft mobility of Washington's features or the wise serenity of Franklin, or, perhaps, the nervous shrewdness of Jefferson.

In retrospect, and consequently with a better understanding of the processes of creative art, I have come to realize that power and conviction in dramatic expression (which is so salient a virtue in illustrative painting) lie fundamentally in its autobiographical nature - that, in each of us is something of everybody; if we but know, as artists, how to uncover and use it. Howard Pyle accomplished just this to startling degree as a phenomenal pictorial record he left testifies....

Posted by Ian Schoenherr at 9:34 PM No comments:

Just opened: Celebrating the Line: Outstanding Illustrators, Designers and Cartoonists of The Art Students League of New York which brings together the work of 60 prominent alumni, including Howard Pyle (and my father, John Schoenherr, too!). Pyle attended the League back in the 1870s when it was located downtown, but from 1904 to 1906 he lectured at its present home on 57th Street.

Go see the show (it's free!) and walk the hallowed halls where so many great artists walked - and drew and painted - before. It's up till November 7th. Gallery hours are Monday thru Friday, 9am to 8:30pm; Saturday and Sunday, 9am to 4pm.

"The Old Violin" and a "New" Pyle Student


Next week, one of my favorite Howard Pyle paintings will be sold by Heritage Auctions. It's "The Old Violin" in black and white oil on board. Although it's said to measure 11 x 7 inches, it's probably closer to 12 x 8 inches.

Heritage dates it 1894, but as a matter of fact Pyle painted it in the spring or summer of 1893 for Dr. Oliver Wendell Holmes' The Autocrat of the Breakfast-Table, which was issued by Houghton, Mifflin & Co., in the fall of that year. Pyle seems to have been particularly fond of this picture, because he presented it to his close friend Winthrop Saltonstall Scudder (1847-1929), longtime head of the publisher's art department.

The painting was later made available as a "Copley Print" by Curtis & Cameron. A long time ago, I found a much-faded example of one, which had been signed in pencil by Pyle. 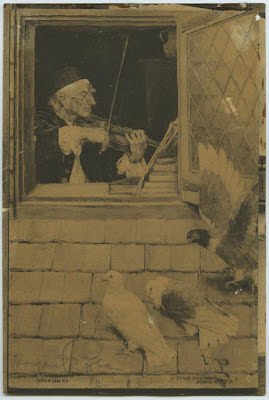 It's really just a photograph of the painting - and the edges of the original board are visible at the margins. It was crudely mounted on cardboard on which was glued a tantalizing typed statement. 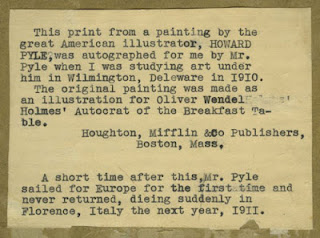 Interesting! But who wrote it? Well, on lifting the print from the cardboard, I discovered this, scrawled on the back: 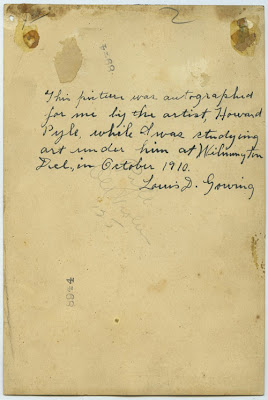 "This print was autographed / for me by the artist, Howard / Pyle, while I was studying / art under him at Wilmington / Del., in October 1910. / Louis D. Gowing"

Somehow, until this print came to light, Louis Daniel Gowing (1884-1967) had successfully avoided inclusion on lists of Pyle's students. Granted, he spent only a few weeks under Pyle’s tutelage, but those with even less exposure to Pyle claimed him as their teacher. Even before joining the "art colony" in Wilmington, Gowing's work had a distinctly Pylean flavor, so it's no wonder he sought the help of the master.

It's quite possible that Gowing was among the 20 or so students who gathered at Pyle's studio to wish him bon voyage - and present him with a pair of binoculars - on the morning of November 21, 1910, the day before he sailed to Italy. (And, incidentally, Winthrop Scudder also saw the Pyles off when their ship stopped in Boston on November 23rd.)
Posted by Ian Schoenherr at 1:05 PM No comments:

Email ThisBlogThis!Share to TwitterShare to FacebookShare to Pinterest
Labels: 1893, 1910, Autocrat of the Breakfast-Table, black and white, Louis Daniel Gowing, oil, Oliver Wendell Holmes, students, Winthrop Scudder
Newer Posts Older Posts Home
Subscribe to: Posts (Atom)
A blog devoted to all things having to do with Howard Pyle (1853-1911), the great American artist, author, and teacher. Brought to you by...