“The Dancer” by Howard Pyle 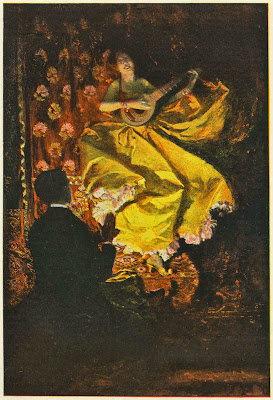 There are certain Howard Pyle pictures which I’ve only ever seen in poor reproductions, but which I know must be great in the flesh. “The Dancer” is such a picture. Until I saw a photo of the original painting the other day, I had only ever seen it in a 114-year-old magazine, in the background of a photo of Pyle’s students, and in the pages of a 50-year-old catalog. And Pyle’s oil on canvas doesn’t disappoint. 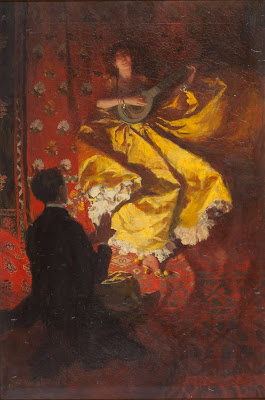 “The Dancer” by Howard Pyle, 1899 (via Heritage Auctions)

“The Dancer” was reproduced for the first time - and as far as I know the only time during Pyle’s life - in his “extravaganza” called “A Puppet of Fate” in the December 1899 issue of Harper’s New Monthly Magazine. A while ago I talked about one of Pyle’s marginal illustrations for this story which features the same two characters as in “The Dancer” - namely, the Reverend Enoch Miller (who soon gets drunk on a mysterious “elixir”) and the Princess Zurlinda Koniatowski. Here’s the passage the painting illustrates:


Again the young lady shrieked with laughter, clapping her hands in immoderate applause; then snatching up the lute that lay beside her, and having struck a few chords of delicious melody, she began singing a foreign song in a voice of such exquisite sweetness as had never before greeted her hearer’s ears. But if this song pleased him so ineffably, how much more transcendent was his delight when the fascinating charmer, having ended her melody, and having struck up a livelier air, began a dance of such graceful and airy lightness as our young clergyman could not have conceived of in his wildest imaginings! The past and the present were alike obliterated from his mind.... The dancer’s hair, in the exquisite mazes of the measures, fell in an ebony cloud to her shoulders and about her face, and from it her beautiful eyes shone like twin stars. The bright and delicate fabric of her draperies floated about her graceful figure like mist about the moon, and her feet twinkled and winked with an incredible swiftness. When at last she flung herself upon the couch, our hero burst forth into such a paroxysm of applause as the wisest essay could not have evoked from him.

Pyle exhibited “The Dancer” in several places over the years: first at his exhibition of work made for the Christmas periodicals at the Drexel Institute and his own studio (and perhaps elsewhere) in 1900, probably at Yale in 1903, definitely at the Art Institute of Chicago later that year, then in 1904 at the Toledo Museum of Art, the Cincinnati Art Museum, the Detroit Museum of Fine Art, the Herron Art Institute in Indianapolis, and possibly at the Kellogg Library in Green Bay. It was priced at $200, then.

Although “The Dancer” may have shown up in subsequent exhibitions, by 1906 Pyle appears to have retired it from his roster. (Its later travels - if any - are muddied somewhat by his painting for the story “Lola” which was also called “The Dancer” or “The Spanish Dancer” - for which a young Estelle Taylor, later Mrs. Jack Dempsey, posed in 1908.) However, in a photograph taken in 1906 or later, we see the painting hanging on the wall of one of Pyle’s students’ studios at 1305 Franklin Street in Wilmington. 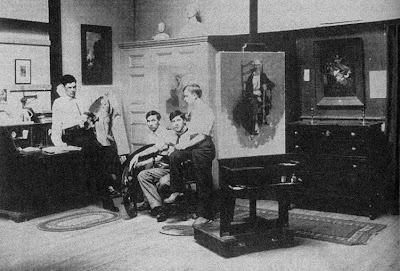 “The Dancer” was sold, eventually: the title plate on the frame says "Loaned by P. T. Dodge" - and although I don’t yet have further proof, this was possibly Philip Tell Dodge (1851-1931) sometime president of the Mergenthaler Linotype Company. And then fifty or so years after Pyle’s death Helen L. “Teri” Card featured the painting - priced at $1200 - in her landmark Catalog 4 devoted to Pyle.

I don’t know where “The Dancer” lived since then, but now, at least, it’s out in public again, albeit briefly. It goes on the block at Heritage Auctions on Saturday, October 26th, and if you find yourself in New York later this month, you’ll be able to look at it up close for a couple of days. The estimate is $20,000-$30,000.

The painting measures 24 x 16 inches, by the way, and the frame, although old looking, is not the original one.
Posted by Ian Schoenherr at 3:13 PM 4 comments:

Email ThisBlogThis!Share to TwitterShare to FacebookShare to Pinterest
Labels: 1899, color, Harper’s Monthly, Modern
Newer Posts Older Posts Home
Subscribe to: Posts (Atom)
A blog devoted to all things having to do with Howard Pyle (1853-1911), the great American artist, author, and teacher. Brought to you by...