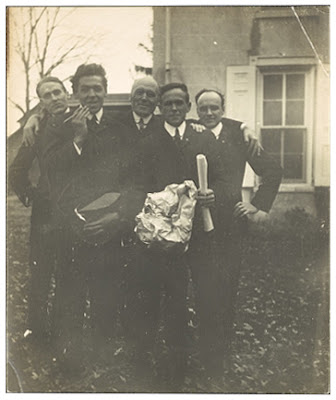 “This is the last week at the Ford and I’ll make the best of it,” wrote N. C. Wyeth to his mother on Sunday, October 18, 1903. “Then back to Wilmington where I hope before I leave again I’ll be doing illustrating galore.”

It was indeed the last week at Chadd’s Ford: after six years, never again would Howard Pyle conduct his “Summer School” there. That very morning he had held his final composition lecture - “an exceptionally fine” one, noted Wyeth, “although my comp. wasn’t up to snuff.”

“Today a friend of Randolphs was out and had a camera,” Wyeth also wrote, referring to the Randolph family of the “Wyndtryst” estate nearby. “He wanted a picture of Mr. Pyle but Mr. Pyle would not be taken alone so took Palmer and I, putting his arms around both of us.”

The result - almost certainly - was the snapshot shown here, although it includes a couple more people than Wyeth mentioned. From left to right are Samuel Morrow Palmer Jr. (28), N. C. Wyeth (about to turn 21), Howard Pyle (50), Allen Tupper True (22), and James Edwin McBurney (34). (Palmer and McBurney, by the way, had studied with Pyle at the Drexel Institute and in 1900 or 1901 Pyle had invited them both to join his newly-formed school of art in Wilmington.)

The five are standing outside Lafayette Hall, where the Pyles lived when summering at “the Ford”. And although it had rained all Saturday and the sky still looks gray in the photograph, on Sunday the weather had cleared, and - as True said in a letter to his mother - sometime after the lecture, or the photo, or both, “we took a long cross country walk and it was great because today has been one of the finest days of the whole year.”
Posted by Ian Schoenherr at 7:49 PM No comments: