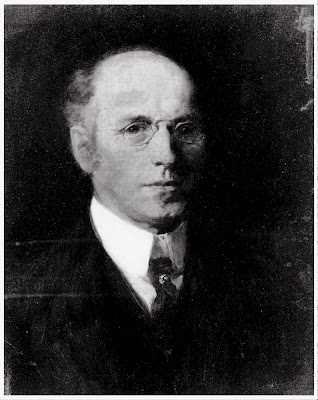 Howard Pyle took lots and lots of photographs - at least according to his daughter Eleanor - but I don’t know if he ever took the equivalent of a “selfie.” That is, unless you count the ones he “took” in ink and paint.

Pyle’s earliest known self-portraits date from 1884 and decorated his verse “Serious Advice” in Harper’s Young People; the last known one came along over two decades later.

In May of 1905, Pyle was elected an Associate of the National Academy of Design and was required to present a self-portrait to its permanent collection. Francis Davis Millet (who had notified Pyle of his election) assured him that “a portrait head is all that is needed & this isnt difficult for you, one of the pupils would be glad of the chance, I know.”

But Pyle didn’t get one of his pupils to do it - and he didn’t get around to doing it himself for almost a year. “I had thought ere this to have had the portrait in your hands,” wrote Pyle to the clerk of the Academy on April 16, 1906, “but many things have intervened to interfere with my purpose.”

At the time, Pyle was deep into his Art-Editorship of McClure’s Magazine and his large picture of “The Battle of Nashville” - but somehow he managed to deliver the painting on April 25th.

As you can see, the eyes and pince-nez are almost identical to the photo immediately to the right (which, I confess, I photoshopped to remove his hand), but Pyle doesn’t quite capture his slight underbite, nor the proportions of his mouth, nor the shape of his nose, and so on.

Then again, Pyle was a reluctant or resistant portrait painter - this despite the fact that he incorporated plenty of portraiture into his illustrations: just look at his depictions of George Washington, Thomas Jefferson, Abraham Lincoln, or Oliver Wendell Holmes. The challenge of capturing the likeness and personality and spirit of someone seated directly in front of him (or reflected in a mirror) seems more than Pyle could handle. As he told his friend Cass Gilbert in a 1910 letter, shortly after sending what he considered to be a failed portrait of Mrs. Gilbert, “I do not like portrait painting; indeed, I hate it.”
Posted by Ian Schoenherr at 3:37 PM 2 comments: 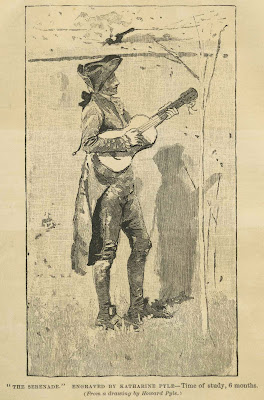 Four days after Abraham Lincoln spoke at Gettysburg, Pennsylvania - and about 100 miles east of there - Howard Pyle’s youngest sister Katharine was born.

The exact location of her birth hasn’t yet been confirmed, but it was either - and more likely - at 621 Market Street in Wilmington, Delaware (at the southwest corner of 7th and Market streets), or at “Evergreen” (or “Evergreens”), a farm on the Philadelphia Pike, about a mile north of town.

Like Howard, Katharine grew up to be an author and illustrator, and here and there they worked on a few projects together. The Wonder Clock, published in 1887, remains their most notable collaboration, but an even earlier joint effort can be found in the pages of The Continent. The July 4, 1883, issue of this short-lived magazine featured John Sartain’s article on “Wood-Engraving as an Occupation for Women” - which in turn featured an engraving by Katharine Pyle “from a drawing by Howard Pyle.”

At that time, nineteen-year-old Katharine was indeed studying wood-engraving at the Philadelphia School of Design for Women in anticipation of turning it into a career. But, fortunately for her, she soon abandoned this handicraft (which was effectively killed off by halftone printing by the turn of the century) and, fortunately for us, she turned her attention again to writing and drawing.
Posted by Ian Schoenherr at 8:40 PM No comments:

Email ThisBlogThis!Share to TwitterShare to FacebookShare to Pinterest
Labels: 1863, 1883, family, Katharine Pyle
Newer Posts Older Posts Home
Subscribe to: Posts (Atom)
A blog devoted to all things having to do with Howard Pyle (1853-1911), the great American artist, author, and teacher. Brought to you by...