“Washington in the Garden at Mount Vernon” 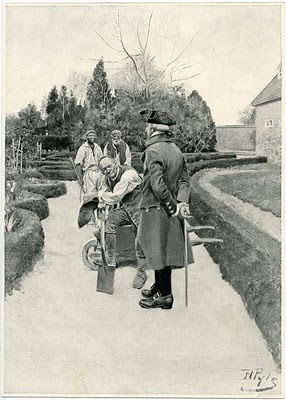 “Washington in the Garden at Mount Vernon” by Howard Pyle (1896)

What was on the mind of Howard Pyle - then in the midst of illustrating Woodrow Wilson’s biography of George Washington - 115 years ago today?

Perhaps a good arrangement of this idea would be in the visit of Lafayette to Mount Vernon. I would represent Washington as directing the old negro gardener in the setting out of some shrub or small tree, and Lafayette standing at a little distance looking on with a certain remote dignity, Mrs Washington, perhaps, standing with him. In this way we might not only represent the way Washington was sought after in his retirement by great folk, such as Lafayette, but also indicate the idea of his Cincinnatus character....

So Pyle wrote to Wilson on March 27, 1896. As you can see, he altered his concept by leaving Lafayette and Martha Washington out of the painting, which he completed sometime in April. The reproduction above comes from “First in Peace” by Woodrow Wilson (Harper’s New Monthly Magazine, September 1896). When Pyle exhibited the painting the following year, he described it in the catalogues in this old-fashioned way:


Here we behold the great Soldier dwelling, Cincinnatus-like, amid those humble and bucolic Joys he held so dear, and to which he was so glad to return after the distracting Clamor of War. Of the Gardener to whom Washington is talking, the ingenious Professor Wilson says, “He agreed with Philip Barter that if he would serve him faithfully as gardener and keep sober at all other times, he would allow him four dollars at Christmas with which to be drunk four days and four nights, etc.”

The original 21 x 15" oil on board - painted in part color - belongs to the Boston Public Library.

And here is the garden from a different point of view, as seen in a turn-of-the-century postcard...

UPDATED June 1, 2011: Alas, Pyle’s low, snaking boxwoods are incorrect (though, in his defense, he was going on the limited information available to him at that time). The History Blog points out in a new post that Washington’s garden was a much different animal.
Posted by Ian Schoenherr at 9:02 AM No comments:

I was looking for this picture in connection with my last post, but couldn’t find it at first since it’s not in the Olive Rush Papers, but in the Miscellaneous Photograph Collection at the Archives of American Art. It’s described there as “Olive Rush (at left) c. 1908” by an unidentified photographer. But the woman on the right is definitely Ethel Pennewill Brown and the photographer is Blanche C. Grant - her head and shoulder are reflected in the mirror as she stoops over the unseen camera. Grant took the picture when she was sharing Howard Pyle’s Wilmington studio with Brown and Rush in 1911 and possibly part of 1912.

The setting is the small anteroom through which one would pass after coming in the front door and before entering the studio proper. On the right is a “Rare Old Tyrolean Cabinet, carved Italian walnut, fitted with pewter basin and fount” that was Lot 161 in the auction of Pyle’s estate in June 1912. (It went for for $185.) And in the mirror is Pyle’s original pen and ink drawing, “Sir Kay showeth the mystic Sword unto Sir Ector,” from The Story of King Arthur. 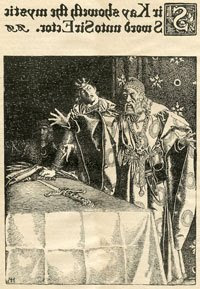 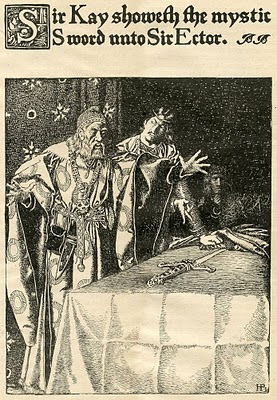 “Sir Kay showeth the mystic Sword unto Sir Ector” by Howard Pyle (1902)
Posted by Ian Schoenherr at 4:29 PM No comments:

Before leaving for Italy in November 1910, Howard Pyle asked his student Ethel Pennewill Brown if she and her friend and fellow-student, Olive Rush (then in Paris), would rent his studio while he was gone. It would cost $50 a month - too much money, in Rush’s view - but Brown accepted Pyle’s offer. Rush was “amazed” by Brown’s action, but was able to rationalize it: “I suppose she could hardly refuse - when he insisted that we take it whether we pay all up or not - after all his former kindnesses it might have seemed ungrateful.”

Indeed, rent was not non-negotiable: some months later, even, Pyle reassured Brown, “I want you to pay me whatever you feel that you can afford upon it. I want at any rate for you to have the studio, and I would rather that you should have it for nothing at all than that it should go into other and stranger hands.”

Rush, however, had to back out of the plan (temporarily, at least, since she needed to hurry from Europe to Indiana and care for her dying mother) and another artist, Blanche Chloe Grant (1874-1948), stepped in. Grant was a stranger to Pyle, but not to Brown, who had met her the previous winter at the Pennsylvania Academy of the Fine Arts.

Fortunately, one hundred years ago today - March 11, 1911 - the newspaper Every Evening described what Pyle called the “girls’ settlement” at 1305 Franklin Street:


...Even though the master is away, art goes on in Wilmington just the same. The atmosphere remains and there is yet Mr. Pyle’s studio with some of his immortal pen and inks hanging on the wall above the Franklin stove, a few oils on the walls, and there are his “properties,” generously left for the common good. He always did lend generously of himself and his substance, and now that he is removed to a distant land, there is still recourse to his possessions, albeit the studio is now given over to the woman in art. Mr. Pyle never has favored the woman for painting, but he always recognised ability, and far from putting obstacles in the way, made the path of true merit and devotion to work as easy as his advice would make it....

Who couldn’t work in the very “Holy of Holies,” the “Sanctum Sanctorum?” The very air bespeaks the presence of Mr. Pyle and emits the elixir that feeds ambition and spurs one on to deeds of art. Miss Grant came to this city about two weeks after Mr. Pyle went abroad, but she feels the influence and has not regretted the choice of her workshop. It had been arranged that Miss Olive Rush would be with Miss Brown, but on her return from Europe, early in December, it was necessary for Miss Rush to go to her home in Indiana; hence Miss Grant’s opportunity.

There is always a wholesome respect and a little awe for Mr. Pyle’s possessions, and everybody takes the best care of his furniture and his effects in general. The studio is “homey” and “comfy” and many drop in, artistic and otherwise. On Saturday nights the gathering devotes its time to sketching, and all the women artists come to draw friends who love to pose for them. On Wednesday nights it’s musical, and the laity join with knights and ladies of the brush. The piano and the violin sound through the lights and shadows of the studio and all is merry within. There is light for the players and gloom for the audience if they seek the south room or the recesses of the high-backed settle before the chimney place. Mr. Pyle’s writing room, up the little stairway, is a fine place for playing that you’re Barbara Frietchie or to wave your handkerchief to Romeo....

And perhaps even more fortunately, somebody took photographs of the studio while Brown, Rush, and Grant were staying there. The ones shown here come from the Olive Rush Papers at the Archives of American Art and more can be seen in Box 6, Folders 7 and 8, conveniently digitized (but not very well labeled) here.

It’s Howard Pyle’s 158th birthday today. If you’re curious about where exactly he was born, take a look at last year’s birthday post for my theory.

On Pyle’s 43rd birthday in 1896, he wrote to Frances Benjamin Johnston, who, a few weeks earlier, had taken several photographs of Pyle (including the two shown here) at her studio at 1332 V Street in Washington, D.C.:


I have received the very beautiful photographs and they have already been much admired in my family.

They are exactly what I felt sure you would do, and whenever after this I want anything especially nice I will know to come to Washington to obtain it. I cannot say more in praise of them than that they are what I thought you would do....

Phoebe and I often speak of our very pleasant visit to you and hope some time in the not too far distant future to have the pleasure of again seeing you.

Howard Pyle and daughter Phoebe (1896) by Frances Benjamin Johnston
Posted by Ian Schoenherr at 9:34 AM No comments:

Email ThisBlogThis!Share to TwitterShare to FacebookShare to Pinterest
Labels: photograph
Newer Posts Older Posts Home
Subscribe to: Posts (Atom)
A blog devoted to all things having to do with Howard Pyle (1853-1911), the great American artist, author, and teacher. Brought to you by...