An Interview About Howard Pyle

Last month, PCNTV aired an hour-long interview with Heather Campbell Coyle about Howard Pyle: American Master Rediscovered. And now you can watch it online. Ms. Coyle is Curator of American Art at the Delaware Art Museum and she knows and understands Pyle like few others do, so by all means watch this in-depth conversation.
Posted by Ian Schoenherr at 1:21 PM No comments:


“The Good, Aged Doctor” - or, more precisely, “The good, aged Doctor, the appearance of whose rotund figure on the streets was the signal for the Parisians to doff their hats” - was one of four illustrations Howard Pyle made for James Barnes’s “The Man for the Hour” in McClure’s Magazine for December 1899.

Benjamin Franklin is, of course, “the good, aged doctor”; the street in Paris is most likely a particular one, but I haven’t yet figured out which.

Pyle probably painted this (and its three companions) in mid-1899, while conducting the Drexel Institute’s second Summer School of Illustration at Chadds Ford, Pennsylvania. I assume this only because his student and future sister-in-law, Ellen Bernard Thompson, made two pictures for this same article at that time. Pyle also probably showed his and Thompson’s pictures at an exhibition of work made by Pyle and by his class for various Christmas 1899 periodicals at the Drexel Institute January 15-26, 1900, and subsequently at Earle’s Galleries in Philadelphia.

I never really thought much of this image, perhaps because the black and white magazine reproduction (see below) flattens and sucks much of the life out of the complex composition. But the original 18.25 x 12.5" oil on board - which is primarily in black, white, and red (and maybe yellow, unless that’s old varnish), yet seems almost full-color - is quite lovely. It’s also for sale: after over a century in the hands of one family - which obtained it from Pyle himself, apparently - it’s going on the block Wednesday, December 12, 2012, at Leslie Hindman Auctioneers in Chicago. That’s tomorrow!

Posted by Ian Schoenherr at 8:35 AM No comments: 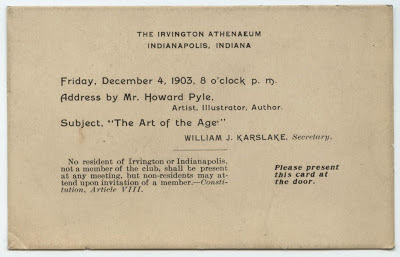 On December 4, 1903, Howard Pyle and his wife, Anne, traveled from Chicago to Indianapolis via the Cleveland, Cincinnati, Chicago and St. Louis Railway. They arrived at 2:40 p.m. and were met by Will David Howe, a professor of English at Butler College (and later an editor and publisher in New York). Howe had tried to get Pyle to come lecture in Indianapolis in 1902, but the ever-busy Pyle begged off, explaining:


I am not only writing a book [The Story of King Arthur and His Knights] and conducting a class and building a house, but I have so many other engagements ahead of me that I hardly know how I shall carry them. Besides I shall be able next season to give you a much better thought out discourse than I could possible build together this year.

So the plan went on hold until 1903, when Pyle was able to coordinate well-paying visits to both Indianapolis and Chicago in one week-long trip. At the Art Institute of Chicago, he lectured on “The Art of the Age,” met more informally with the instructors and students (including a 19-year-old Harvey Dunn, who would join Pyle’s school the following November), and attended the opening of a one-man-show of some 110 of his pictures.

“As my lecture in Chicago will be more directly addressed to artists it will probably have many practical suggestions which will be well to omit in your lecture,” Pyle informed Howe. “Accordingly I will both concentrate and condense my Chicago words for Indianapolis.”

Unfortunately, no manuscript or transcript “The Art of the Age” has yet turned up, but in describing an earlier version of it Pyle said that he had “endeavored...to explain my understanding of the difference between the Art of the past and the Art that is demanded by the present age.... [and] stated very clearly and concisely my opinion that our age and our times require an art that, if not distinctly different from the Art of the past, is, at least, an adaptation and completion of the art of the past to fit our present needs.”

At any rate, at 8:00 p.m. on December 4th, Pyle “spoke to a large audience in chapel hall at Butler College” - reported the Indianapolis Morning Star - under the auspices of (and, perhaps, restricted to members and guests of) the Irvington Athenaeum. The paper also noted that “Classes were dispensed with and a reception was given Mr. Pyle at the college residence.”

The next evening, Mr. and Mrs. Pyle left Indianapolis on a 6:50 p.m. train. “Our trip home was most comfortable and the six children welcomed us with open arms,” said Anne in a thank-you letter to Howe. And Pyle’s students may have been equally welcoming: “Mr. Pyle is in Chicago,” wrote N. C. Wyeth to his mother, right after the Pyles had embarked on their trip, “and we are left for a whole week to battle alone with our troubles, and when we feel blue we’ll have no kind and powerful guardian to come in and cheer us up.”

Posted by Ian Schoenherr at 7:33 PM No comments:

Email ThisBlogThis!Share to TwitterShare to FacebookShare to Pinterest
Labels: 1903, Art Institute of Chicago, Harvey Dunn, Indianapolis, N. C. Wyeth, on art, students, teacher
Newer Posts Older Posts Home
Subscribe to: Posts (Atom)
A blog devoted to all things having to do with Howard Pyle (1853-1911), the great American artist, author, and teacher. Brought to you by...