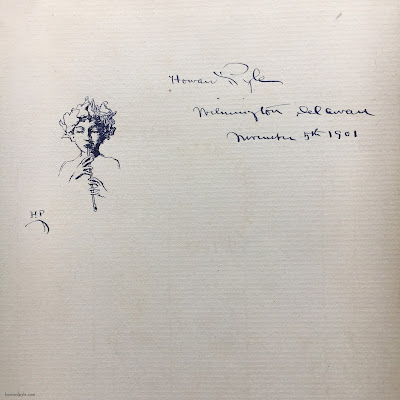 Howard Pyle sometimes drew a little picture when he signed his books, like in this copy of the 1901 edition of The Wonder Clock which he inscribed on November 5, 1901.
Posted by Ian Schoenherr at 12:52 PM No comments:

The Story of Siegfried 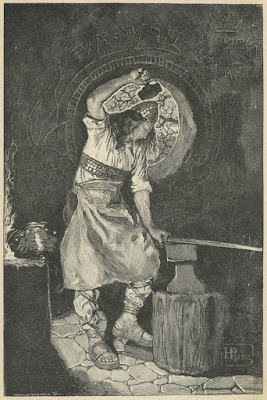 “The Forging of Balmung” by Howard Pyle (Frank French, engraver)

“Please let me know when you are likely to be in New York again,” wrote E. L. Burlingame, editor at Charles Scribner’s Sons, to Howard Pyle on January 12, 1882. “We have a matter of some importance which I think would interest you; at all events I should like to talk it over with you at your first opportunity.”

The “matter” was the illustrations for James Baldwin’s retelling of the Siegfried (or Sigurd) legends. At the time, Pyle - whose interest in Medieval folklore was already well-established - was under an exclusive, one-year contract with Harper & Brothers for his pictures, but as it only extended to periodicals and not to books, he was able to accept the commission. 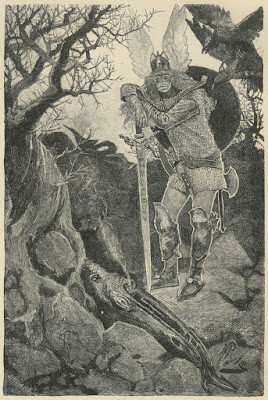 Four and a half months later, on May 26, 1882, Burlingame updated Baldwin on the book’s progress:


Up to this time the manuscript has been in the hands of the artist, Mr. Howard Pyle, who has been somewhat delayed in making drawings.... The illustrations are now well advanced, however; they are six in number, full-page cuts, and are in our opinion admirably conceived and drawn. Proofs of them will be sent you as they are received from the engravers.

It’s not clear if “the illustrations” referred to Pyle’s black and white gouache paintings or to the wood-engravings thereof, but Pyle definitely delivered his work before June 8, when Burlingame again wrote to Baldwin:


We send you by this post some very rough unmounted photographs of Mr. Howard Pyle’s drawings for Siegfried. These will give you no idea, to be sure, of the great beauty and force of the pictures themselves; but they only convey the grouping and general composition well enough to show you that we have given the work to one of the best artists for such a subject. Mr. Pyle has been cordially interested in it, and in our opinion has done his part in the true spirit of the text. 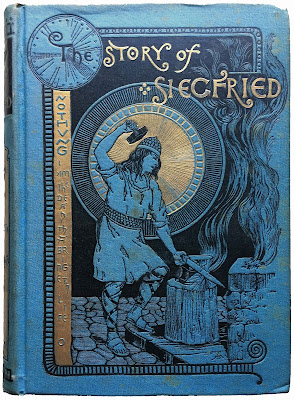 Handsomely bound, with cover art adapted from Pyle’s “The Forging of Balmung,” The Story of Siegfried was published in October 1882. The illustrations were roundly praised: the Detroit Free Press said that they “deserve special mention for their beauty and fidelity. Nothing better in book illustration has been done this season.” “The interest in the legends will be much enhanced in young eyes by the striking pictures furnished by Howard Pyle,” observed The San Francisco Chronicle, and The Daily Union-Leader of Wilkes-Barre noted that the book “is happily illustrated by Pyle, whose drawings, it is safe to say, have never been surpassed for such a purpose.” And Pyle’s hometown paper Every Evening remarked:


The dear, delightful people of the Nibelungen come before one bodily, and in such a way that one feels thankful to the artist for his creation of them. The illustrations are full of ideality, and without that apparent assumption of oddness that has, in the eyes of some, spoiled Mr. Pyle’s good work. The awakening Brunhild by the kiss of Siegfried, is exquisite. The calm, placid expression of her face, and the wonder that overspreads the knight’s, display a real feeling with the legend, and without which feeling no man should illustrate a book. 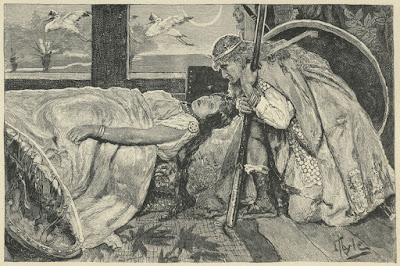 “The Awakening of Brunhild” by Howard Pyle (E. Clément, engraver)

What Pyle himself thought of the illustrations is not known, but “The Death of Siegfried” (below) is surely one of the best and most “Pylean” things he made thus far in his 6-year-old career.

In 1885, four of the set were included in the Grolier Club’s Exhibition of Original Designs for Book Illustration, but afterward they - like most of Pyle’s Scribner work - joined the other two at the publisher’s offices on Broadway near Astor Place, and then to Fifth Avenue between 20th and 21st Streets, where Charles Scribner’s Sons relocated in 1894. 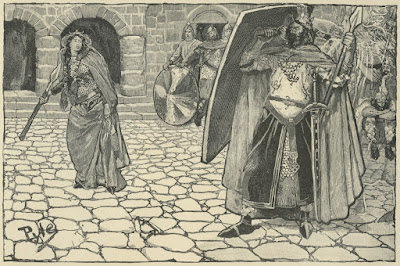 “The Trial of Strength” by Howard Pyle (John Karst, engraver)

Over the years, some of Pyle’s originals found their way out of storage - sold or given away piecemeal - but most remained there until 1915, when The Wilmington Society of the Fine Arts acquired some 68 of them - almost all that were left. The six Siegfried illustrations, however, were not included. Why? 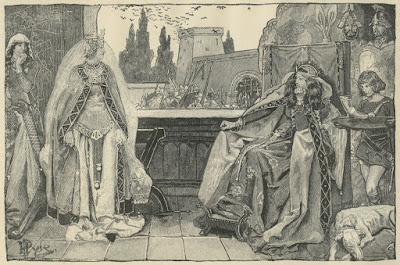 “The Quarrel of the Queens” by Howard Pyle (John Karst, engraver)


BLAZE IN SCRIBNER’S
—————
Fire Starts in Counting Room and Does $6,000 Damage.
A fire originating on the third floor of Scribner Bros.’ publishing house, Nos. 153, 155 and 157 Fifth avenue, at 5 o’clock this morning caused damage amounting to $6,000. Patrolman Jones saw the reflection of the flames and turned in an alarm.
The firemen broke into the building and found the blaze had gained headway in the counting room on the third floor and worked through to the fourth floor. The origin of the fire is a mystery.

The extent of the “$6,000 damage” is also a mystery, but Scribner’s index-card inventory of artwork (now at the Brandywine River Museum) shows that all six Siegfried pictures and at least one other Pyle oil - not to mention works by his fellow artists, like N. C. Wyeth - were destroyed. 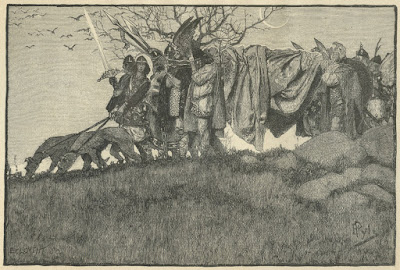 Love Will Tear Us Apart 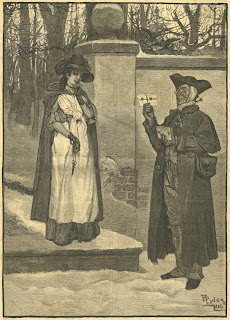 It was in 1880, most likely, that 27-year-old Howard Pyle - then living and working at his parents’ house, but soon to be married - painted “St. Valentine’s Day in the Morning”. The black-and-white gouache measured about 18 x 15 inches or so, but the picture as engraved by Gustav Kruell was only 12.7 x 9 inches when it appeared in the February 26, 1881, issue of Harper’s Weekly.

As far as early Pyles go, the postman, the costuming, and the setting are as strong as usual - even then he was a master at depicting overcast days and the tangle of distant trees. But I confess that I don’t love the woman.

Helen “Teri” Card (1903-1971) - the comparatively early champion and dealer of illustration art - didn’t love her, either. And sometime before issuing her landmark, pulse-quickening “Catalog #4” of Pyleana in the early 1960s, Card tore off the offending half of Pyle’s original and tossed it. I wouldn’t have gone that far: the woman’s coy expression doesn’t feel right, but the rest of her is rendered nicely enough.

Card sold the surviving “better half” (see below) for $90 to collector Clifton Waller Barrett, and it now lives at the Brandywine River Museum.

Email ThisBlogThis!Share to TwitterShare to FacebookShare to Pinterest
Labels: 1881, black and white, Harper’s Weekly, Valentine's Day
Newer Posts Older Posts Home
Subscribe to: Posts (Atom)
A blog devoted to all things having to do with Howard Pyle (1853-1911), the great American artist, author, and teacher. Brought to you by...