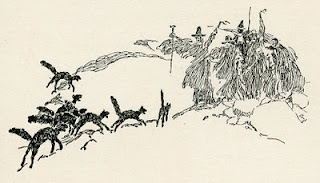 And now here are two pen and inks that Howard Pyle made for “The Broomstick Train,” contained in the little leather volume, The One Hoss Shay, by Oliver Wendell Holmes, published by Houghton, Mifflin and Company in 1891.

The drawing above is titled “They called the cats” and the one below is “They came - at their master’s call.” Pyle’s letters show that he made these two in June or July 1891.

“I think these are about as successful pen and inks as I have ever done,” he said of his work on the book in a letter of July 2. And of the pictures for “The Broomstick Train” in particular, he wrote on July 7, “there may be very little to show in the way of result, but I really put a considerable deal of care and thought upon them.... I am myself inclined to think that they are, perhaps, in some respects, the best of the three lots.” The two other “lots” being the title poem and “How the Old Horse Won the Bet.” All exhibit the almost nervous, yet confident handling we see here - a far cry from his much “slower” ink drawings of the 1880s. 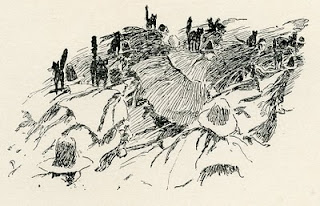 Posted by Ian Schoenherr at 9:22 PM No comments: 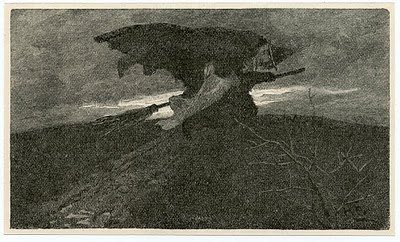 Yet another witch by Howard Pyle - and surely one of my all-time favorites.

This was the headpiece for “Witchcraft” by Edmund Clarence Stedman in Harper’s New Monthly Magazine, for December 1884. Editor Henry Mills Alden’s letters to Stedman allow us to date the creation of this picture with some accuracy: on May 20, 1884, Alden wrote, “The subject you propose is an especially attractive one. I think Pyle would do both pictures well; but as you will have the poems ready so soon, we will leave that matter to be determined afterward.” And on August 28, Alden wrote, “Last week the illustrations came in - i.e. the engravings. I send you proofs of these...” So Pyle must have painted this in June or July 1884 (well, plus or minus a few days into May and August). It was engraved by Thomas H. Heard.

The original has yet to surface - that is, if it exists at all: in the early morning of December 8, 1902, a fire swept through the home of William Charles Le Gendre in Mount Kisco, New York - and one of Pyle’s three black and white oil “Witchcraft” paintings was destroyed. Perhaps Pyle himself had given the work to Le Gendre, who was a friend and one of the illustrator’s roommates at 1267 Broadway in 1877-78.

The glowing eyes of the witch and the bleak landscape call to mind a scene from F. W. Murnau’s Faust (starting at about three minutes in - it still makes my hair stand on end).
Posted by Ian Schoenherr at 2:10 PM No comments: 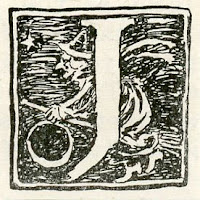 And here’s another witch by Howard Pyle from the same story as my previous post. It’s more roughly executed than, say, this initial “T” from The Wonder Clock, but it’s still quite charming.
Posted by Ian Schoenherr at 1:05 PM No comments: 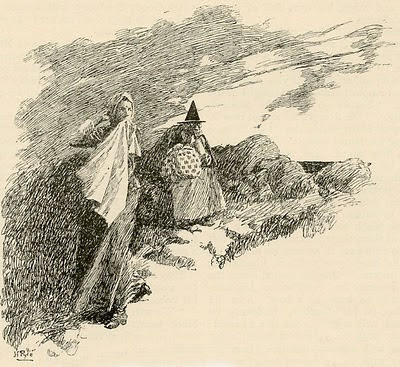 In looking for something Halloween-y to post, it occurred to me how often Howard Pyle depicted witches - or at least old hags from Massachusetts with pointy black hats. So here’s one that hasn’t gotten a lot of play as it only appeared in Harper’s New Monthly Magazine for February 1892. It served as a headpiece for Mary E. Wilkins’ spooky story, “The Little Maid at the Door.”

Posted by Ian Schoenherr at 12:53 PM No comments:

Jeff Menges just blogged about Boutet de Monvel and somehow - yet not unexpectedly - it conjured up thoughts of Howard Pyle. Stylistically, the two artists seem to have had little in common, but they shared a love of bold composition and strong design. It’s interesting to compare how Pyle and Boutet de Monvel depicted the same scene from the story of Joan of Arc.

Pyle was certainly aware of the Frenchman and they may even have become personally acquainted when the latter visited America in connection with an exhibition of his pictures at the Pennsylvania Academy of the Fine Arts, held March 24 to April 6, 1899. In a letter to their mutual friend, Robert Underwood Johnson, Pyle wrote:


I hope I may have the pleasure of meeting M. Boutet de Monvel when he is in Philadelphia, but I doubt if it be much to his pleasure, as it would, in a certain sense, be to my embarrassment - for I do not speak his language. The impossibility of inter-communication of thoughts and ideas is always distressing to me.

Did Pyle overcome his anxieties and meet his fellow artist? I don’t yet know.
Posted by Ian Schoenherr at 12:27 PM No comments:

Email ThisBlogThis!Share to TwitterShare to FacebookShare to Pinterest
Labels: Boutet de Monvel
Newer Posts Older Posts Home
Subscribe to: Posts (Atom)
A blog devoted to all things having to do with Howard Pyle (1853-1911), the great American artist, author, and teacher. Brought to you by...