They Fluttered and Twittered

—from “A Transferred Romance” by Howard Pyle

I’ve looked high and low for uses of “twitter” (not to mention “tweet”) in the writings of Howard Pyle, but the above is the only thing I can find. At any rate, please follow me @ianschoenherr on Twitter, where I invariably tweet links to these blog posts. Thanks!

Posted by Ian Schoenherr at 2:03 PM No comments: 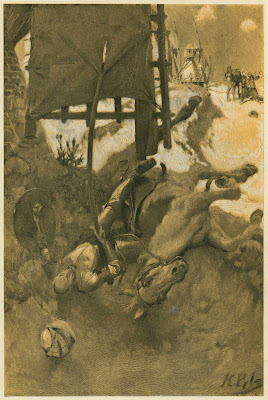 Many of Howard Pyle’s pictures are well-documented. Some, not so much. For example, correspondence concerning the creation of “The Fate of a Treasure Town” series of pirate paintings - among the most notable of Pyle’s later works - has yet to surface.

The same - or even less - can be said of Pyle’s sole known illustration of Cervantes’ Don Quixote. In fact, the only documentation that I’ve seen are its entries in the two Pyle bibliographies and a note in the Pyle scrapbook at the Delaware Art Museum stating - rather vaguely - that the original painting was sold in Philadelphia. When or to whom it was sold is not indicated and the original has yet to turn up, so we don’t know its size, its palette, or anything else. One day, maybe.

Until then, here is Howard Pyle’s “Don Quixote’s Encounter with the Windmill” as it appeared in the November 1901 issue of The Century Magazine, part of a special feature titled “Three Pictures of Don Quixote” (the other two were by Arthur I. Keller and André Castaigne). Engraver Frank H. Wellington sweetened the 7.6 x 5.0" duotone plate, which, unfortunately, was printed out of register.
Posted by Ian Schoenherr at 8:16 AM No comments:

Email ThisBlogThis!Share to TwitterShare to FacebookShare to Pinterest
Labels: 1901, Medieval, The Century Magazine

On May 30, 1903, Augustus Saint-Gaudens’s Sherman Monument was unveiled at the southeast corner of Central Park in New York City. Although there’s no known evidence that Howard Pyle was present at the ceremony, we do know that he saw it in place within the next few days. Pyle, who delivered an address at Yale University’s School of Fine Arts in New Haven, Connecticut, on June 1, and passed through Manhattan on the way there and back, wrote to Saint-Gaudens on June 4:


I have just returned from New York and I feel that I want to tell you how beautiful I think your Sherman Memorial Statue to be.

It impresses me, as your work always does, as being not only beautiful but great, and I am sure that it is not prejudice upon my part but a matter of calm judgment that leads me to feel that you are easily the leading sculptor in the world today -

I could say more - but will not do so.

Saint-Gaudens’s reply is lost, but Pyle’s letter seems to have reminded him to send a copy of his bronze Robert Louis Stevenson medallion, which he’d promised to give Pyle a year earlier - after Pyle had sent Saint-Gaudens his pen-and-ink drawing “The Song of Peace”. Pyle received it on July 15, 1903, and apparently it’s still owned by his descendants.
Posted by Ian Schoenherr at 4:39 PM No comments:

Email ThisBlogThis!Share to TwitterShare to FacebookShare to Pinterest
Labels: 1903, Augustus Saint Gaudens, friends
Newer Posts Older Posts Home
Subscribe to: Posts (Atom)
A blog devoted to all things having to do with Howard Pyle (1853-1911), the great American artist, author, and teacher. Brought to you by...