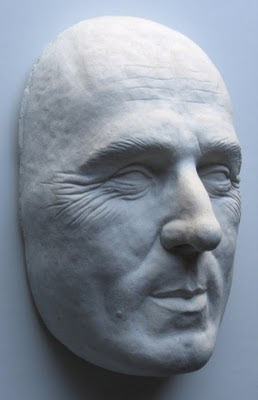 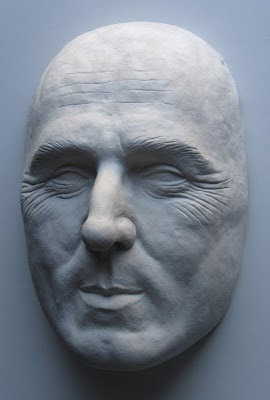 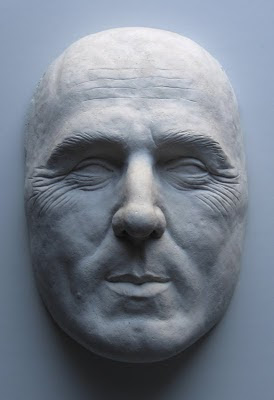 I've always been fascinated by life masks and death masks and I used to dream that I would discover a mask of Howard Pyle. But I never did.

So I made one. I gathered all the Pyle photographs that I knew of and constantly referred to them as I sculpted his face in dull green plastiline. And while I wanted to replicate Pyle's peculiar and elusive features, I also wanted to capture something of his spirit or his personality. It was meditative and yet obsessive work, and at one point it became known simply as The Head. "I'm going upstairs to work on The Head," I'd say. "How's The Head coming along?" people would ask.

Finally, The Head was "finished" - or at least it was time for me to stop tweaking it. Next, I created a latex mold and - crouched in the cellar with a bucket of water, a scoop, and a bag of plaster - I made a series of casts and distributed them to people and institutions that I thought might appreciate having Pyle's face beaming down at them.

Since "finishing" I've found many more photographs of Pyle, but I think my sculpture will do as a three-dimensional likeness - until a real Howard Pyle mask comes to light.

I should add that one of Pyle's New York friends, critic and essayist Laurence Hutton, accumulated an amazing number of masks and wrote a few articles about them for Harper's New Monthly Magazine - later published in book form as Portraits in Plaster (New York: Harper and Brothers, 1894). I'm convinced (but have no proof!) that Pyle saw this collection during one of his visits to the Hutton household - and now you, too, can see it here.
Posted by Ian Schoenherr at 8:41 AM 4 comments: 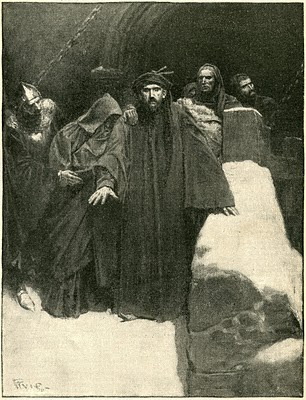 “I know nothing about the story: do you? No? Well, the picture is very impressive, has too, that indefinable charm of mystery - of half hinting, half inviting inquiry, yet giving nothing. There are things in nature have this same power to attract - to overawe, yet withold particulars. These fellows go ahead more and more. These certainly are better than the Century’s even, which are fine enough. This democratization of art keeps up a quick pace.”


Walt Whitman in conversation with Horace Traubel, January 21, 1891, while looking at a copy of Harper's Young People, which featured an installment of Howard Pyle’s serialized novel for children, Men of Iron.

Posted by Ian Schoenherr at 4:18 PM No comments:

Under the Weather with Howard Pyle

I've been laid up with a cold and disinclined to do much of anything. But I've emerged from the fog just enough to pull some quotes from Howard Pyle on the topic that has filled my mind - or at least my head - for the last few days. Here are extracts from two letters to a cousin:


"...upon my word Miss Alice if you could only see my nose - no I mean if you only knew what a terrible cold I've caught. I wish I had jotted an '!' for every time that I sneezed or blew my nose so that your tender heart might pity me accordingly..."

"My conscience pricks me terribly to think that I transferred my most uncomfortable cold to yourself. But courage my friend I am as yet a companion in misery although I can now boast but of a chronic imitation of the mucus membrane culminating ever and anon in an abortive sneeze." 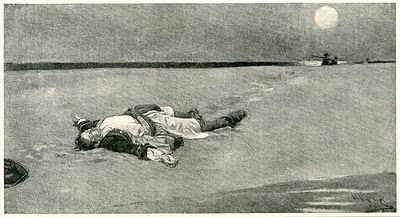 “…‘Too good - too good,’ The pirate captain dead on the sand. If I get that I will worship you, it, and once more take stock in humanity. As for what you will get - anything I have.…”

"Should I now and then appear to question your details, I hope you will consider that I do so with all deference, and only with a desire to obtain the uttermost accuracy possible."

Posted by Ian Schoenherr at 7:28 AM No comments:

The January 11, 1890, issue of the New York Ledger included a “Souvenir Supplement” featuring “The Captain’s Well,” a poem by John Greenleaf Whittier, illustrated by Howard Pyle. Here is one of the illustrations (which Pyle painted in late summer or fall 1889), untitled, and engraved on wood by Henry Wolf. 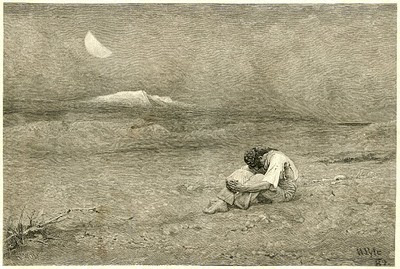 Note the marked resemblance to Pyle’s much better known “Marooned” of 1887... 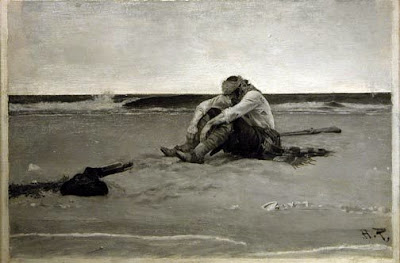 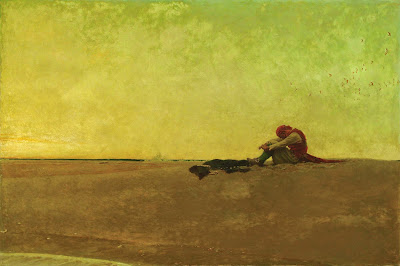 Like many artists, Pyle revisited similar themes, scenes, and poses now and then, and he made at least four variations on this one (the third, chronologically speaking, is in a private collection).

The figure here, however, is neither marooned, nor a pirate. Rather, he is Valentine Bagley (1773-1839), a Massachusetts sailor, who was shipwrecked off the Arabian coast in 1792.

“He wandered for fifty-one days over the desert, suffering intensely from lack of food and water, and from heat, having been robbed by Bedouins of all his clothing,” said William Sloane Kennedy in “In Whittier’s Land” (The New England Magazine, November 1892). And here is an extract from Whittier’s poem, specific to the picture.


In the Arab desert, where shade is none,
The waterless land of sand and sun,

Under the pitiless, brazen sky
My burning throat as the sand was dry;

My crazed brain listened in fever dreams
For plash of buckets and ripple of streams;

And opening my eyes to the blinding glare,
And my lips to the breath of the blistering air,

Tortured alike by the heavens and earth,
I cursed, like Job, the day of my birth.

Then something tender, and sad, and mild
As a mother's voice to her wandering child,

Rebuked my frenzy; and bowing my head,
I prayed as I never before had prayed:

Pity me, God! for I die of thirst;
Take me out of this land accurst;

And if ever I reach my home again,
Where earth has springs, and the sky has rain,

I will dig a well for the passers-by,
And none shall suffer from thirst as I.

Washington and Steuben at Valley Forge, 1896 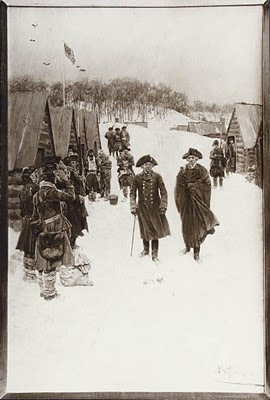 "Washington and Steuben at Valley Forge" by Howard Pyle (1896)

Howard Pyle felt compelled to convince Woodrow Wilson that an illustration featuring Valley Forge would be perfect for the latter's article, “General Washington” (Harper’s Monthly, July 1896). “Not only is it a very sublime subject, but there are no doubt instances of individuality displayed by Washington at that time that would be very dramatic,” Pyle stressed in a letter of February 5, 1896. “I wish you would consider that and see what you think of it, for I feel very sure that it is a point we should not miss.”

Wilson didn’t need too much convincing. “I can agree very heartily to an incident taken from Valley Forge,” he replied on February 7, “if only you hit upon something that took place there which dramatically reveals the man, and not merely the now conventional subject of the sufferings of the troops from cold and privation. Washington’s greatness at Valley Forge was moral: can you get at that in a picture of any veritable incident?”

Pyle outlined some possibilities on February 11:


To illustrate this I would choose one of three subjects, the picture of Washington paying a visit to one of the huts - a sick man huddled in his cot, another lean man near, and a cadaverous soldier standing near him, or else I would represent a picture of Washington in his own hut - the log shanty into which he moved after living in the stone house called his headquarters - either reading his Bible or else receiving one of his many worrying letters, the messenger standing warming his hands by the firelight, or else a picture of Washington and Baron Stuben [sic] passing down the street of huts with a foreground group, of soldiers standing at the door saluting as the two officers pass.

In my opinion the last of the three subjects will make the best illustration.


Pyle didn’t wait for Wilson’s approval, but declared in the same letter, “I shall begin to-day upon the picture of Washington and Stuben [sic].” It wasn’t that Pyle didn’t care what Wilson thought: rather, his initiative shows the level of trust that had developed between the two men over the course of their collaboration. Indeed, Wilson proved “unaffectedly delighted” with Pyle’s choice of subject and felt all the more convinced that Pyle understood “the objects I have in view quite as sympathetically as I do myself.”

By early March, Pyle was able to inform Harper and Brothers that he would deliver the picture - and the others for the article - “within a few days”. And on the 16th he assured Wilson, “The last set of illustrations are, I think, by far the most successful that I have made, and I am almost sure you will like them - especially the one of Washington and Stuben [sic] at Valley Forge.”
Posted by Ian Schoenherr at 12:55 PM No comments:

Howard Pyle's "The Strange Adventures of Carl Spich" appeared in the January 3, 1885, issue of Harper's Weekly. The story and its illustrations were never reprinted. As far as I know, Pyle made the picture shown here - "Maybe the snow deadened his footsteps, maybe it was the Devil" - in oil on a panel (and I'm not sure if it was wood or cardboard panel) measuring about - but not quite - 17 x 12.5 inches. The unsigned wood-engraving in the magazine is 9.1 x 6.6 inches. 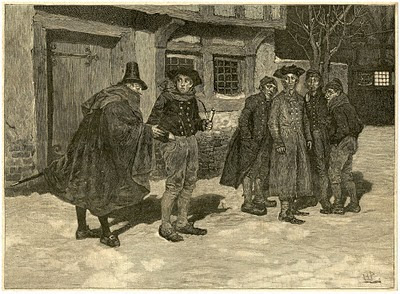 Email ThisBlogThis!Share to TwitterShare to FacebookShare to Pinterest
Labels: oil 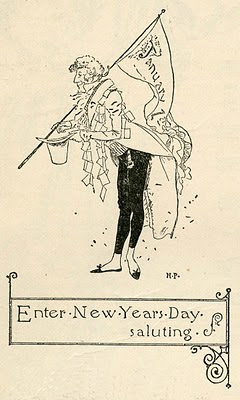 Email ThisBlogThis!Share to TwitterShare to FacebookShare to Pinterest
Labels: ink, lettering
Newer Posts Older Posts Home
Subscribe to: Posts (Atom)
A blog devoted to all things having to do with Howard Pyle (1853-1911), the great American artist, author, and teacher. Brought to you by...