This past July 18th was the 150th anniversary of the Second Battle of Fort Wagner. In 1883, Augustus Saint-Gaudens was commissioned to create a sculpture honoring the 54th Regiment Massachusetts Volunteer Infantry - commanded by Robert Gould Shaw - which suffered heavy losses in the battle.

Some fourteen years later, on May 31, 1897, the sculpture was unveiled on Boston Common. About four months after that, Howard Pyle, returning from a visit to Boston, sent a note to Saint-Gaudens in which he said:


Will it interest you to have one so much out of the world as I tell you how great is your Shaw Monument?

It impresses me now as the greatest and the most distinctly American achievement and I can forsee to reason to alter my opinion in the future.

(On Pyle‘s letter, by the way,which is now at Dartmouth College, Saint-Gaudens wrote, “I value this highly” - confirming yet again that Pyle’s opinion was indeed important to him.)

And in subsequent years, Pyle the teacher repeatedly referred to the sculpture to illustrate a point. During his September 5, 1904, composition lecture, for example, he said:

...for instance, take something I have often cited - the Shaw Memorial by St. Gaudens.

St. Gaudens had the problem before him of a row of marching soldiers with their guns all on a level.

Most artists would have broken the line of the guns by making some higher than others trying to get variety, but St. Gaudens, defying all rules - frankly put them straight across the composition. And so by insisting upon an apparently ugly fact he strengthened his work.

National Public Radio recently ran a story on the memorial in case you’d like to hear more.

Posted by Ian Schoenherr at 2:28 PM No comments:

Howard Pyle Photographs His Family at the Beach

Delaware Today posted a photograph taken by Howard Pyle of his wife and children at Rehoboth Beach. They date it 1890, but it was more likely taken in 1894 or 1895. If you take a look at the image, you’ll see, from left to right:

Posted by Ian Schoenherr at 2:18 PM No comments:

Andrew Wyeth - who was a huge fan of Howard Pyle’s work, who owned quite a few originals (including this amazing one) as well as Pyle’s oft-used boots, and who spurred Pyle's grandson Howard Brokaw to amass the largest Pyle collection in private hands (since presented to the Brandywine River Museum) - would have turned 96 today. Here are two (only two?) past posts which reference him. Here, too, is a video of Wyeth’s studio with glimpses of two Pyle-related items: a 1900 poster for To Have & To Hold (hanging low on the wall, about 26 seconds in) and a 1910 photo of Pyle taken by Paul Strayer.
Posted by Ian Schoenherr at 9:22 AM 2 comments:

If it wasn’t for Denis Byrd’s Blog I would have entirely missed “Howard Pyle and Vincent Van Gogh: Reflections of Changes in Taste” by Danielle Rice.
Posted by Ian Schoenherr at 6:54 AM 1 comment:

This great op-ed by Shelly Reuben recently appeared at HuntingtonNews.net - and also, apparently, in The Evening Sun of Norwich, New York.
Posted by Ian Schoenherr at 1:03 PM No comments: 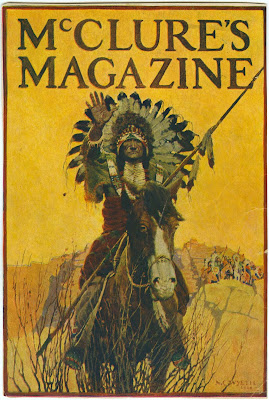 On a Friday night 107 years ago this month, N. C. Wyeth wrote to his “Mama” back in Hingham, Massachusetts:


This week has gone past like lightning. - Really, I never experienced such a “fast” week in my life. I've bent every effort, poured every bit of my inner self into my work this week, endeavoring to reach a much higher plane in my work, and secondly to satisfy Mr. Pyle in his wish for a “big” cover design. I have, I am positive, reached a higher plane, according to those opinions about me, including Mr. Pyle’s. I would like so much to have you see the picture. It’s one of an Indian chief with his right hand up, palm forward showing friendship. He is on his mustang with his feathered lance across his saddle.

The week has been very individual. I know I shall always remember it because it has been one of intense seriousness of purpose and more or less of a victory for me.

At any rate, Wyeth was writing in the midst of turmoil both personal and professional: he was a new husband, had a new house, had his first child on the way, and his work was in dizzying demand. He also had a very demanding teacher: “Mr. Pyle expects so much of me,” Wyeth had written a few weeks earlier. For better or worse - probably worse - Howard Pyle had taken charge of the art department of McClure’s Magazine that February and ever since had been pressuring his prize pupil to illustrate more and more for it.

But Wyeth was remarkably resilient, full of energy and ideas, and the pressure resulted in the creation of some of his strongest pictures, at least in these pre-Scribner’s Illustrated Classics days. And he was only 23-years-old!
Posted by Ian Schoenherr at 4:32 PM No comments:

Mother, Howard Pyle and Me

Howard Pyle, sometime poet - or, rather, writer of “jingling verses” as he called them - was also the unwitting subject of several poems. I already talked about an unpublished poem written by Joseph A. Richardson in 1883 and another written by Edwin Markham in 1900.

Now here’s one more, which I only discovered today. It’s by the Virginia-born author-illustrator-painter-stained glass artist (and “charming gadfly” according to Katharine Graham) Marietta Minnigerode Andrews (1869-1931) and it was published in the Washington, D.C. Evening Star on November 10, 1906. The credit line says it came from Andrews’ Echoes From a Washington Nursery, which I assume was a book, copyrighted that same year, but which I have, so far, found no trace. I also assume that a newspaper artist made the accompanying picture; Mrs. Andrews had been a student of Pyle’s old friend William Merritt Chase and the (very, very) little I’ve seen of her work is stronger than the crude illustration shown here.


MOTHER, HOWARD PYLE AND ME

I very much admire the style
Of tale that is told by Howard Pyle.
I think, somehow, it makes me good
To read about brave Robin Hood.

The fact is, I myself have see
That yeoman bold in “Lincoln green.”
I saw him when I went one day
With father to the matinee.

I thought the music very fine -
It made my eyes just dance and shine;
Yet by the fire I'd rather be -
Just mother, Howard Pyle and me! 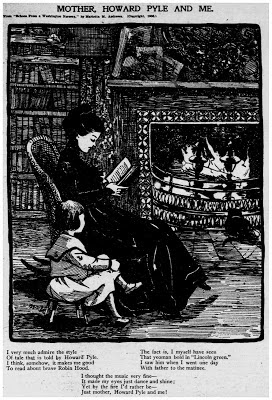 Posted by Ian Schoenherr at 2:12 PM No comments:

Email ThisBlogThis!Share to TwitterShare to FacebookShare to Pinterest
Labels: 1906
Newer Posts Older Posts Home
Subscribe to: Posts (Atom)
A blog devoted to all things having to do with Howard Pyle (1853-1911), the great American artist, author, and teacher. Brought to you by...