What Will the Author Think?

“Appreciative praise is always delightful, especially so from an author whom one has been called upon to illustrate. I always wonder what effect my crude materialistic rendering of his airy fancyings will have upon the poet; will he be indignant or will he be amused? Will he grind his teeth or will he grin? Pegasus flies well with quills to his wings; convert the feathers to lead pencils and the poor nag must perforce stumble along the rocky way as best he can.”

Posted by Ian Schoenherr at 9:57 AM No comments: 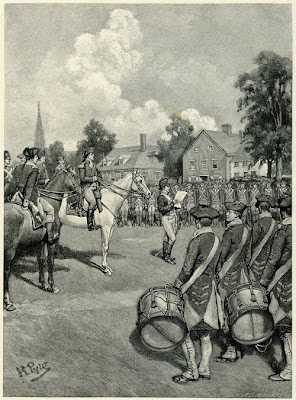 According to George Washington’s General Orders of July 9, 1776:


The Hon. The Continental Congress, impelled by the dictates of duty, policy and necessity, having been pleased to dissolve the Connection which subsisted between this Country, and Great Britain, and to declare the United Colonies of North America, free and independent States: The several brigades are to be drawn up this evening on their respective Parades, at Six OClock, when the declaration of Congress, shewing the grounds and reasons of this measure, is to be read with an audible voice.

The General hopes this important Event will serve as a fresh incentive to every officer, and soldier, to act with Fidelity and Courage, as knowing that now the peace and safety of his Country depends (under God) solely on the success of our arms: And that he is now in the service of a State, possessed of sufficient power to reward his merit, and advance him to the highest Honors of a free Country.

One hundred and fifteen years later, illustrator Howard Pyle was commissioned to commemorate the event for an article, “How the Declaration Was Received in the Old Thirteen,” by Charles D. Deshler in the July 1892 issue of Harper’s New Monthly Magazine.

Letters from Pyle (now at the Morgan Library in New York City) help to pin-point the creation of picture shown here: Pyle wrote to Arthur B. Turnure, then the art editor of Harper’s Monthly, on December 12, 1891, “I have not yet had an opportunity of looking over the MS of ‘How the Declaration was Received.’ I will read it, however, at the earliest opportunity and report to you as you desire.”

Then, on January 3, 1892, Pyle informed Turnure, “Your letter is received and I will give the very earliest attention possible to ‘How the Declaration was Received.’”

Three days later, Pyle said, “I hope, if all goes well and I complete the work I am now upon that I shall be in New York on Friday, I shall then bring you a plan of...‘How the Declaration was Received.’”

So, unless Pyle’s plans went awry, on Friday, January 8, he visited Turnure at Franklin Square in lower Manhattan and talked over his ideas. But whatever was discussed and whenever it was discussed, on January 29, Pyle wrote, “I send you to day by Express, two pictures. One of them is illustrative of ‘How the Declaration Was Received’ - Washington having the Declaration read to the troops.”

Subsequently, Pyle’s black and white oil on illustration board - measuring some 23.5 x 17.5 inches - was engraved on a 6.5 x 4.8" block of wood by Albert Munford Lindsay (who later studied with Pyle at the Drexel Institute).

Looking out the window on this July evening in New York, Pyle and Lindsay seem to have nailed the light just right. I like that.

Eventually, the painting wound up in the hands of Harold S. Schutt, who gave it to the Brandywine River Museum in 1980.

(On personal note, this engraving was reproduced in Jean Fritz’s Alexander Hamilton, The Outsider, to which I added some illustrations of my own.)
Posted by Ian Schoenherr at 6:31 PM No comments:

Email ThisBlogThis!Share to TwitterShare to FacebookShare to Pinterest
Labels: 1892, American history, black and white, Colonial, George Washington, Harper’s Monthly
Newer Posts Older Posts Home
Subscribe to: Posts (Atom)
A blog devoted to all things having to do with Howard Pyle (1853-1911), the great American artist, author, and teacher. Brought to you by...