He looked down and sang out, “Lower away!” 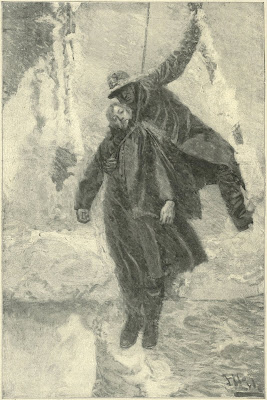 Howard Pyle’s painting “He looked down and sang out, ‘Lower away!’” has never gotten much attention.

There are two chief reasons for this: the first is that it was printed only once, in Scribner’s Magazine for January 1900, where it and two other pictures - one of which was featured here - accompanied Pyle’s short story, “A Life for a Life.”

The tale was inspired by the effects of the Blizzard of 1888 on the ships in and around the Breakwater at Lewes, Delaware. A day or two after the storm, Pyle made the 90-mile trip “down the bay” to look things over and interview several survivors. The result was the article “The Great Snow Storm in Lewes Harbor” in Harper’s Weekly for March 31, 1888. But the eye-witness accounts lingered with Pyle, and some ten years later he wrote a “A Life for a Life,” which Scribner’s Magazine accepted for publication probably sometime in late 1898.

By early January 1899, Pyle had finished his story’s three black and white oil illustrations (each about 18 x 12 inches). But he had misgivings about “Lower away!” almost as soon as he had shipped it: on January 10th, he wrote to art editor Joe Chapin that while the other two could stand as they were, “The picture of the man being lowered out of the shrouds, however, does not seem to me to be so satisfactory. I do not feel the blowing of the wind and the figures strike me as being too much like models posing.”

The painting was returned to Wilmington, but it wasn’t until June 13, 1899, that ever-busy Pyle told Chapin, “I am sending you today the drawing for ‘A Life for a Life’ which I have, I trust, improved by making the storm a little more realistic and powerful.” It’s not clear if Pyle altered the figures, after all, or if enlivening the background had remedied their “posed” look.

Charles Scribner’s Sons paid Pyle $300 outright for the three paintings, which were subsequently exhibited in a travelling show of illustrations made for the firm. And in 1915 two of the three - as well as scores of other Pyle originals - were sold to the Wilmington Society of the Fine Arts. But “Lower away!” was not among them. And here is the second reason why it’s gotten so little attention: born out of one disaster, “Lower away!” (like Pyle’s set of pictures for The Story of Siegfried) succumbed to another: the Scribner building fire of July 29, 1908. 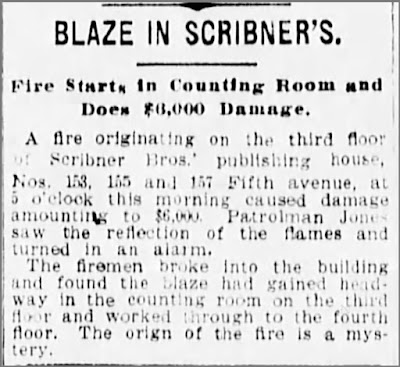 Email ThisBlogThis!Share to TwitterShare to FacebookShare to Pinterest
Labels: 1888, 1898, 1899, black and white, Charles Scribner’s Sons, Joseph Hawley Chapin, Modern, oil, Scribner's Magazine
Newer Posts Older Posts Home
Subscribe to: Posts (Atom)
A blog devoted to all things having to do with Howard Pyle (1853-1911), the great American artist, author, and teacher. Brought to you by...