I’ve mentioned my mini-obsession with Howard Pyle’s boots before. They’re the ones that show up again and again in over 25 years’ worth of Pyle’s pictures - and then, perhaps more famously, in Andrew Wyeth’s “Trodden Weed.” Well, now you can see the boots themselves in a BBC documentary on Wyeth hosted by Michael Palin - at about the 17:25 minute mark. (Later on, too - starting at 47:58 - Pyle’s summer home at Chadd’s Ford is featured when Palin visits its later owners, the Sipalas.)
Posted by Ian Schoenherr at 12:24 PM No comments: 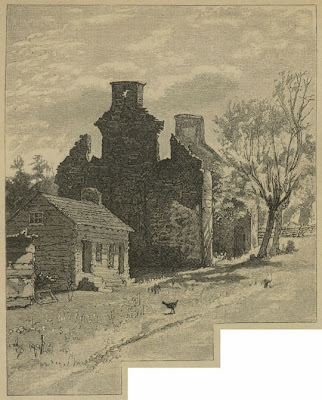 In the summer of 1879, two 26-year-olds set off to Maryland to gather data for an article on the Old National Pike. One was Liverpool-born writer William Henry Rideing, who would supply the text, and the other was artist Howard Pyle, who would illustrate it.

As documented in “The Old National Pike” (Harper’s New Monthly Magazine, November 1879), Rideing and Pyle’s westward journey began in Frederick, Maryland, and more or less ended about 125 miles in Cumberland. Incidentally, some better-informed historians have argued that that stretch of road wasn’t even a part of the National Pike, since Cumberland officially represented its eastern terminus - but that’s a debate for another time or place.

At any rate, in Frederick they hired a coach and driver to take them Cumberlandward, stopping here and there along the way so Rideing could interview people who knew the “Road” and its history, and so Pyle could draw the interviewees and old buildings.

Unfortunately, Pyle’s published illustrations of those buildings are, for the most part, vaguely titled, like his “Ruins of Old Post Tavern” (above). Rideing’s text, however, shows it to be the remains of the elusive “Mrs. Bevans’s” - where they had hoped to find a bed and a meal or two:


Between Hancock and Cumberland the road is almost deserted, and there is no tavern in over forty miles. We were told that we might find accommodations for the night at “Mrs. Bevans’s,” and as the day sped, and our horses showed the effects of toiling over mountain after mountain, Mrs. Bevans became a tremendous object of interest to us. Near sundown when the silent valleys were flooded with the golden light of the afternoon, it was evident that our team was unfit to go much farther; but no habitation was in sight, although from time to time we saw an abandoned toll-house or tavern, and once we met a freckled boy, who said it was about five miles to “Mrs. Bevans’s.” We continued on for over six miles, and then we met a freckled and angular man, who said “Mrs. Bevans’s” was about three miles farther. We labored over another mountain and down a rocky road, inclosed by the gloomy pines. At the foot, in a hollow, was a splendid old tavern, unroofed, moss-grown, windowless, and doorless. This was “Mrs. Bevans’s” in the past, and at one side of it, in contrast with its massive masonry, was a small cabin of two rooms, with some six or seven unappetizing children about the door; this was the “Mrs. Bevans’s” of the present. It was out of the question; the children took the edge off our hunger, and we urged the horses farther on, being informed that we would find a farm-house on the summit of the next mountain.

Since “Mrs. Bevans’s” was already a ruin in 1879, I thought that finding any subsequent trace of it was hopeless. But Thomas B. Searight, in his The Old Pike - A History of the National Road (1894), states:


At the foot of Town Hill, on the west side, Henry Bevans kept a tavern. It was a wagon stand, and likewise a station for one of the stage lines. The house stood on the north side of the road, and enjoyed a good trade.

Then after some more searching, I came across a photograph of the very same site, taken five years after the Rideing-Pyle trip by another pair of travellers, Thomas Dwight Biscoe (1840-1930) and his brother Walter Stanley Biscoe (1853-1933). 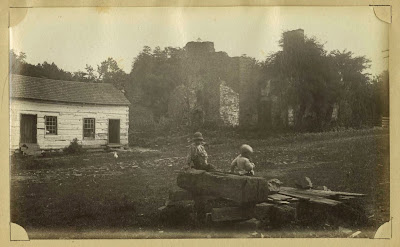 The photo (owned by Southern Methodist University, Central University Libraries, DeGolyer Library, where you can see a higher-resolution scan) is titled “Old ruin of a grand house near bottom of Town Ridge [sic] looking back on our road” and in parentheses “Bevansvill[e].”

To the left of the ruin is the same white-washed cabin Pyle depicted. And in the window and foreground we see, perhaps, a few of the same “unappetizing” children Rideing described.
Posted by Ian Schoenherr at 4:58 PM No comments:

Email ThisBlogThis!Share to TwitterShare to FacebookShare to Pinterest
Labels: 1879, Harper’s Monthly, landscape, travels
Newer Posts Older Posts Home
Subscribe to: Posts (Atom)
A blog devoted to all things having to do with Howard Pyle (1853-1911), the great American artist, author, and teacher. Brought to you by...