Usually, when imagining Howard Pyle, the Movie, I cast Tom Wilkinson in the title role - though he might be too old for it at this point. And I’d definitely want to hear David Ogden Stiers recite Pyle’s words or narrate a Pyle documentary à la Ric Burns or Ken Burns on, maybe, PBS’s American Experience. (Stiers could have easily been cast as Pyle, too, once upon a time.) But did Pyle sound like either of these two men? It’s impossible to say, barring the discovery of a wax cylinder recording of Pyle’s voice. I dream of finding one; I doubt, though, that one exists.

So, how did Pyle sound and speak?

In a 1903 letter, Pyle told John Ferguson Weir that his voice had “a somewhat dominant and carrying quality.”  Fellow illustrator (and alleged student) Ernest Clifford Peixotto recalled Pyle’s “manly voice.” Pyle pupil Harvey Dunn remembered his teacher’s “far carrying voice” and his “deep and compelling laugh.” A 1909 interviewer said Pyle spoke “easily and swiftly...in curt sentences and jerky pauses.” Biographer Charles D. Abbott said, “Howard Pyle had a rich tenor voice, and considerable facility in using it, that made him very popular in musical circles.” Indeed, Pyle sang in public quite often, particularly in the choir of his church and in the chorus of the Tuesday Club. He also - in his twenties, at least - performed in amateur theatricals.

In my mind’s ear, I hear a clear, confident, steady stream of words issuing from Pyle’s mouth.

But artist James Edward Kelly remembered that when he met the young Howard Pyle in 1876, he “talked with a slight lisp.” And Pyle’s longtime friend, journalist Edward Noble Vallandigham, who befriended Pyle in the early 1880s, recalled that he had “a slight impediment of speech.”

Pyle himself echoed Vallandigham’s unfortunately vague description at least twice: in 1895, when invited to do a reading of his works, Pyle begged off, blaming “somewhat of an impediment in my speech that would perhaps make it unpleasant and awkward both for myself and my hearers.” Refusing a similar invitation that same year, he confessed, “I have unfortunately at times a slight impediment in my speech that might in such a public reading be unpleasant, both to you and to myself.”

Whatever it was, though, the “impediment” didn’t always stop Pyle from singing, acting, teaching, or, for that matter, from more formal speaking engagements. At the same time that he was turning down the above mentioned offers, he was finding his way as a teacher, starting with lectures on “Practical Illustration” to students at the Drexel Institute in the fall of 1894. And it wasn’t long before Pyle did begin to accept invitations to speak: in 1897 he delivered the commencement address at Delaware College, and in the first decade of the 20th Century he spoke before the Society of Arts and Crafts of Boston, the School of Fine Arts of Yale University, the Art Institute of Chicago, the Franklin Inn Club in Philadelphia, Milwaukee-Downer College, the Irvington Athenaeum (in Indianapolis), the Art Students’ League of New York, the National Academy of Design, the American Institute of Architects - and so on - not to mention his ten years’ worth of almost weekly “composition lectures” to students and guests at Wilmington and Chadd’s Ford.

Somewhere along the line, it seems that Pyle overcame his “impediment,” or at least he became less self-conscious about it. Perhaps his conviction to the cause of raising illustration from what he described as a “discredited handicraft” to a distinctly American school of art had something to do with it.
Posted by Ian Schoenherr at 2:34 PM 1 comment:

Email ThisBlogThis!Share to TwitterShare to FacebookShare to Pinterest
Labels: biography

The official trailer of “Howard Pyle and the Illustrated Story” has just gone up on YouTube.
Posted by Ian Schoenherr at 5:37 PM 1 comment:

Email ThisBlogThis!Share to TwitterShare to FacebookShare to Pinterest
Labels: video

If you’re in the greater Philadelphia or Wilmington area and get the PBS station WHYY, tune in tonight at 10.00 p.m. and watch “Howard Pyle and the Illustrated Story.” It’s a documentary put together in conjunction with the recent Delaware Art Museum show and features some great interviews with historians, experts and enthusiasts. I particularly enjoyed hearing what Jamie Wyeth had to say, both from the point of view of an artist and someone whose family owes much to Pyle.

Copies of the DVD are also available on Ebay.
Posted by Ian Schoenherr at 4:12 PM No comments:

“An Old-time May Day in ‘Merrie England’”

In his scrapbook, Pyle wrote, “This picture was ordered by St Nicholas on the strength of the Carnival in Phila.” And of that picture Pyle scribbled: “This was my first seriously ordered work. I received the commission to paint this picture after having completed a drawing for Harper’s Weekly called a ‘Wreck in the Offing’. It is a labored composition but was much liked.”

“Carnival, Philadelphia, 1778” appeared in “The Battle of Monmouth Court-House” by Benson J. Lossing in the June 1878 Harper’s New Monthly Magazine. The original black and white gouache painting is now at the Delaware Art Museum. It differs slightly from the engraving shown here; evidently, the engraver altered Pyle’s image, or - more likely, I think - Pyle tweaked it after it was engraved, perhaps to ready it for the Salmagundi Sketch Club’s exhibition at the Kurtz Gallery in February 1879. At which time, the New York Herald heralded it as “a careful and good scene at carnival time in Philadelphia in colonial days.”

Posted by Ian Schoenherr at 8:32 PM No comments: 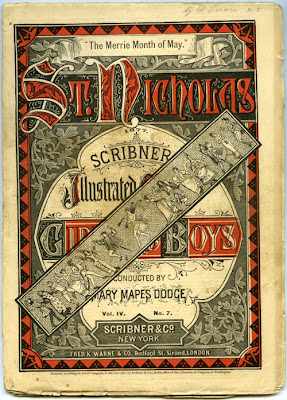 This is probably the first magazine cover ever to feature an illustration by Howard Pyle. It’s not something that Pyle remembered, apparently, and it also eluded his bibliographers. But here it is: the May 1877 cover of St. Nicholas, Scribner’s Illustrated Magazine for Girls & Boys.

Of course, Pyle didn’t design the entire cover, just the long rectangular illustration that the publisher - for better or worse - slapped across it. Fortunately, a word of explanation was included in “The Letter Box” on page 508:


The beautiful tablet by Mr. Pyle, which adorns our cover this month, tells a true story in its own lively fashion. Its quaint costumes of successive centuries, showing how May-day rejoicings have been kept up from age to age, will send some of you a-Maying in encyclopedias and year-books, but it gives its real meaning at a glance - which is, that through all time people have welcomed the first coming of the spring. “Merrie May,” meaning pleasant May (for in old times “merry” simply meant pleasant), was as fresh and beautiful ages ago as it is to-day; and in one way or another the thought at the bottom of all the rejoicing is ever that of the old carol:

“A garland gay I’ve brought you here,
And at your door I stand;
It’s but a sprout, but it’s well budded out.
The work of our Lord’s hand.”


Pyle most likely drew this “tablet” for “The Merrie Month of May” in the depths of the winter of 1877, while occupying a “small hall bedroom” at 250 West 38th Street (between Seventh and Eighth Avenues) in New York.
Posted by Ian Schoenherr at 2:38 PM No comments:

Email ThisBlogThis!Share to TwitterShare to FacebookShare to Pinterest
Labels: 1877, children's, ink, St. Nicholas
Newer Posts Older Posts Home
Subscribe to: Posts (Atom)
A blog devoted to all things having to do with Howard Pyle (1853-1911), the great American artist, author, and teacher. Brought to you by...