The Song of Captain Kidd 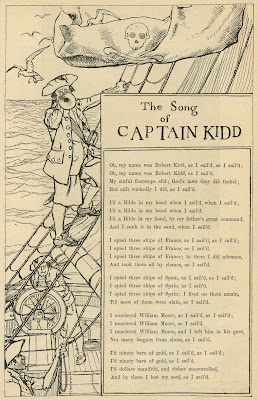 In honor of International Talk Like a Pirate Day here is something from Howard Pyle.

“The Song of Captain Kidd” is, in fact, one of Pyle’s earliest known pirate pictures, and it’s one of eleven illustrations he made at the tender age of twenty-six for Lizzie W. Champney’s “Sea-Drift from a New England Port” which was published in Harper’s New Monthly Magazine for December 1879.

Pyle hand-lettered the title, but the rest of the text was typeset. The song isn’t the work of Champney, but was an “oldie” even in 1879 - and lo and behold there’s at least one site devoted to its history and where you can hear the tune. Pyle himself later wrote of it:


Maybe two hundred years have passed since Captain Kidd took his leave of the world at Execution Dock in London, yet even at this day, I suppose, seven or eight out of every ten people who read, remember at least a part of the famous ballad that has drifted down to us from that far away past - “The Song of Captain Kidd.”...

It is such popular songs as this more than almost anything else, that makes the name of an adventurer popular upon the lips and to the ears of the great public. So it is now that after 200 years, the name of Captain Kidd is that above all others suggestive of sea-roving, of the Black Roger, with its white skull and crossbones, of buried treasure, of death and of terror.

A Glimpse Inside the Howard Pyle Studios

This link probably won’t be viable for ever, but it gives us a look inside the Howard Pyle Studios in Wilmington - particularly of the seldom seen upper floor. As the article says, the studios’ owner is having its first major outdoor fundraiser – 100 Artists Helping Artists – September 14-15 in Greenville, Delaware - to help with costs of upkeep and preservation of the buildings.

Posted by Ian Schoenherr at 8:31 AM No comments:

Email ThisBlogThis!Share to TwitterShare to FacebookShare to Pinterest
Labels: studio
Newer Posts Older Posts Home
Subscribe to: Posts (Atom)
A blog devoted to all things having to do with Howard Pyle (1853-1911), the great American artist, author, and teacher. Brought to you by...