“No American Writer Can Come Within Touch of You”

Howard Pyle’s fondness for the writings of William Dean Howells is well documented - mostly in Pyle’s own correspondence. On October 30, 1895, Pyle wrote yet another glowing letter to his literary idol, mentor, and friend:


My wife and I are reading your Shaker story together. I was so much impressed with the first number that I sat down immediately and wrote Harry Harper what I so strongly felt - that it only added to my already formed opinion that no American writer can come within touch of you. The measure of your success lies far beyond the radius of the present into the vaster cycle of the future....

The first number of your story was startlingly true to nature, the succeeding numbers are charmingly idyllic.

“Your Shaker story” was “The Day of Their Wedding” which appeared in seven weekly installments (or “numbers”) in Harper’s Bazar between October 5 and November 16, 1895. And “Harry Harper” was J. Henry Harper, a friend of both Howells and Pyle, and a member of the publishing firm.

Pyle had, in fact, expressed a similar sentiment in a letter of February 26 that same year: “I do not of course know what are your present rewards of popularity but I feel very sure that you are writing for future readers.” Over the past century, however, Howells’ stock hasn’t performed quite as well as Pyle thought it would.

But now, future readers, why not read the novel yourselves and put Pyle’s assessment to the test?
Posted by Ian Schoenherr at 3:46 PM No comments:

A Birthday Card for Theodore Roosevelt 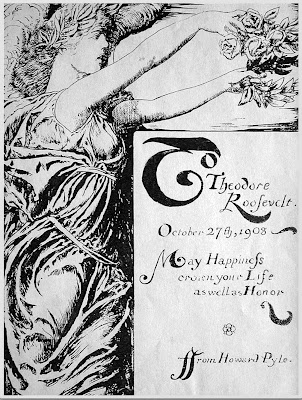 Although I have yet to find out when exactly Howard Pyle and Theodore Roosevelt first met (the earliest known in-the-same-room-at-the-same-time instance was at a January 1896 dinner in honor of Owen Wister), by 1898 Pyle was referring to the then-Assistant Secretary of the Navy as “my friend”.

Their bond, I gather, had its roots in their mutual love of history, but after 1901 Pyle also became an enthusiastic supporter of then-President Roosevelt’s policies. In addition to Pyle’s occasional visits to the White House, the two exchanged letters and favors over the years, and on the eve of Roosevelt’s turning 50, Pyle sent him the drawing shown here, which prompted the following thank-you note:

Who could have a more beautiful birthday card? I shall prize it always for its own sake and still more for the sake of the donor.

Pyle’s original pen-and-ink drawing now belongs to the Theodore Roosevelt Collection in the Houghton Library at Harvard University.
Posted by Ian Schoenherr at 9:00 AM No comments:

Email ThisBlogThis!Share to TwitterShare to FacebookShare to Pinterest
Labels: 1908, ink, Theodore Roosevelt
Newer Posts Older Posts Home
Subscribe to: Posts (Atom)
A blog devoted to all things having to do with Howard Pyle (1853-1911), the great American artist, author, and teacher. Brought to you by...