A Cover Design for the New Year 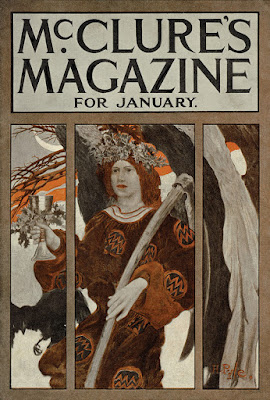 Howard Pyle’s cover design for the January 1900 issue of McClure’s Magazine is not necessarily his best work, nor is it very well known: it was used only once and the original art is missing.

Pyle had promised to do the job early in 1899, but, busy as ever, he only got around to submitting sketches in July, while working and teaching at Chadd’s Ford. After a couple of false starts, he finally hit on something acceptable to the publisher in mid-August. In a letter accompanying his ultimately approved sketch, he explained, “My idea is to depict somewhat the feeling of the Angel of Futurity bearing in one hand the wassail bowl and in the other the scythe of Fate, the crescent moon typifying a new era and the dead branches that of the past.”

It looks like Pyle replaced the bowl with a chalice, for some reason. And it’s not clear how he executed the final picture: was it - like many of the illustrations made by his female students - in charcoal tinted with watercolor? Or was it in oil?
Posted by Ian Schoenherr at 4:26 PM No comments:

Email ThisBlogThis!Share to TwitterShare to FacebookShare to Pinterest
Labels: 1899, 1900, allegorical, McClure's Magazine
Newer Posts Older Posts Home
Subscribe to: Posts (Atom)
A blog devoted to all things having to do with Howard Pyle (1853-1911), the great American artist, author, and teacher. Brought to you by...