“I have made a very great mistake” 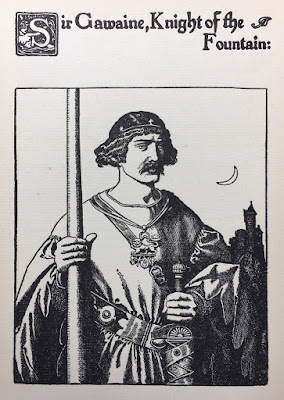 “I have just received the complimentary copies of my last book, ‘Sir Launcelot and His Companions,’” wrote Howard Pyle to Charles Scribner’s Sons on October 26, 1907.

Like many authors and illustrators, Pyle may have leafed through the new volume with a mixture of pride and apprehension. And in this case an embarrassing discovery was in store: “I notice in looking it over that I have made a very great mistake, for the picture on page 200 entitled ‘Sir Gawaine of the Fountain’ should read ‘Sir Ewaine of the Fountain.’”

Ever careful Pyle had not been careful enough. As with most of his children’s books, he had delivered Sir Launcelot and His Companions in fits and starts while juggling other work. To safeguard against errors and inconsistencies, on mailing one batch he had asked the publisher “to send me proofs of these drawings as soon as they are reproduced, for I shall maybe use the same characters in later decorations.”

And yet, although the picture served as a frontispiece to Part V of the book titled “The Story of Sir Ewaine and the Lady of the Fountain,” and three other illustrations of which featured Sir Ewaine, “Sir Gawaine” had slipped past Pyle - not to mention everyone else involved with the production of the book.

“Perhaps before any more copies are printed you will have this changed in New York (where almost anyone could do the lettering) or else send it to me to have the lettering changed,” Pyle continued in his letter of October 26. “It is very curious that this mistake should have happened but, as I say, it is altogether my fault.”

The expense of correcting the plate, however, must have been too much for Scribner’s to consider, and Pyle must have forgotten all about it, because the mis-titled illustration has lived on, reprint after reprint, and has never been called out or corrected.

But as I am “almost anyone [who] could do the lettering” (as well as being in New York), I’ve belatedly honored Pyle’s request, below. 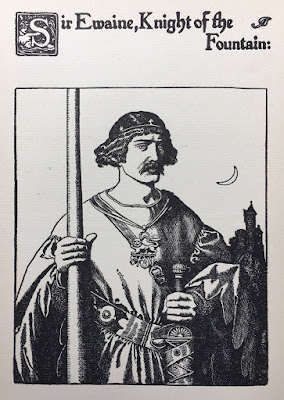 Email ThisBlogThis!Share to TwitterShare to FacebookShare to Pinterest
Labels: 1907, Charles Scribner’s Sons, ink, King Arthur, Medieval
Newer Posts Older Posts Home
Subscribe to: Posts (Atom)
A blog devoted to all things having to do with Howard Pyle (1853-1911), the great American artist, author, and teacher. Brought to you by...