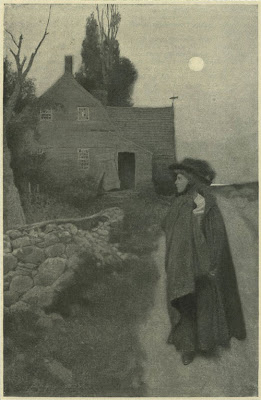 “The Haunted House” was built, as it were, by Howard Pyle for Mary E. Wilkins Freeman’s story “The Gold” in the December 1904 issue of Harper’s Monthly Magazine. There, however, it was titled “Catherine Duke quickened her steps.” Pyle subsequently rechristened it and included it in various exhibitions of his work. So, among other places, it traveled to Boston in 1906 and to Minneapolis in 1907. In between those two shows, it sat in Pyle’s studio for a bit, as can be seen in the corner of this photo taken in the late spring or summer of 1906. (“The Suicide” is its neighbor, by the way.) 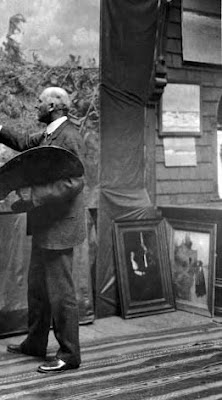 Pyle, then, was painting - or, more likely, pretending to paint - “The Battle of Nashville” for the Minnesota Capitol building and preparing to begin “The Landing of Carteret” for the Essex County Court House.
Both of these structures were designed by architect Cass Gilbert, to whom Pyle wrote on September 4, 1907:


I am going to send you a black and white picture of an old house which I call “The Haunted House.” The picture has been rather a favorite with me, and I think that you, as an artist, will appreciate the decorative scheme of black and white - say in a dining room. Anyway, I want you to have the picture, partly because I like it myself, and largely because I hope you may like it. So if you will accept it with my affectionate regards you will add another bond to our friendship.

Pyle inscribed the 24.75 x 16" black and white oil on canvas in red paint and shipped it off. I don’t know if Gilbert ever hung it in his dining room, but the original eventually landed back with Pyle’s grandson and its present and permanent address is now the Brandywine River Museum.
Posted by Ian Schoenherr at 12:51 PM No comments:

A Thread Without a Knot 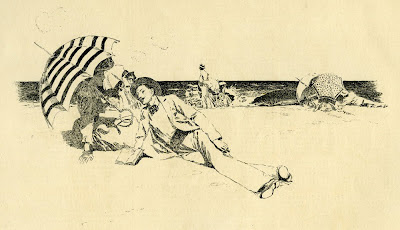 I couldn’t let Labor Day and “official” summer pass by without posting this delicate and relatively unknown pen-and-ink gem by Howard Pyle. It’s the headpiece for his story, “A Thread Without a Knot,” published in Harper’s Weekly for September 3, 1892. It shows the hero of the story, Jack Sylvester, and his temporary love interest, Miss Lannon, at an unidentified seashore...


Then she raised her parasol, and they went slowly down to the beach together. They sat just behind a little bank of sand that half hid them from the board walk. Sylvester lay beside her, stretched at length in the hot sand. “What are you reading?” said he; and he took up the book that she had brought with her. It was Howells’s Lady of the Aroostook. “Oh yes!” said he, without awaiting her reply.

“Have you ever read it?” said she.

Sylvester laughed. “Well, rather,” he said. “Lovely, isn’t it? Wonderful how he holds the interest centred in just those few characters and bounded by the narrow rails of the sailing ship!”

She did not make an instant response. “I don’t know,” said she, presently. “I haven’t got that far in the book. Yes, I think it’s a very nice story. Mamma brought a lot of books down with her, and I just began reading this this morning.”

Sylvester looked up quickly. Then he looked down again and began idly turning over the pages. “Did you ever read Silas Lapham?” said he, after a little while.

“Howells wrote that too,” said he, a little dryly; and then he closed the book and gave it back to Miss Lannon.

Email ThisBlogThis!Share to TwitterShare to FacebookShare to Pinterest
Labels: 1892, Harper’s Weekly, ink, Modern, William Dean Howells
Newer Posts Older Posts Home
Subscribe to: Posts (Atom)
A blog devoted to all things having to do with Howard Pyle (1853-1911), the great American artist, author, and teacher. Brought to you by...