“Her native songs for him she sung” 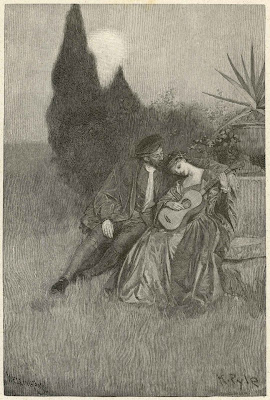 Another seldom seen Howard Pyle illustration. This one was Pyle’s sole contribution to The Inca Princess by Mrs. M. B. M. Toland, published by J. B. Lippincott Company in 1885. Pyle’s original hasn’t yet come to light, but most likely he painted it in black and white oil on board.

The reproduction above was engraved on wood by Frank H. Wellington, who, you may recall, also engraved Pyle’s equally Thomas Wilmer Dewing-esque “Thereupon the poor woman screamed aloud, and cried out that he was a Murderer” several years later. Wellington was particularly adept at capturing the softness or murkiness of Pyle’s atmospheres.

Note of June 8, 2014: Since writing the above, I’ve learned that the author herself owned Pyle’s painting - along with many of the other illustrations made for her poems - and following her death her collection of 119 originals was bequeathed to the San Francisco Art Association / Mark Hopkins Institute of Art in 1896. But then the 1906 earthquake happened and, according to Wikipedia, “Accounts differ regarding how much of the collection [the entire collection, not just the Toland bequest] was saved from the 1906 fire.” So whether the Pyle survived, or wound up in another institution, is an open question.
Posted by Ian Schoenherr at 11:55 AM No comments:

“The young fellow lounged in a rattan chair” 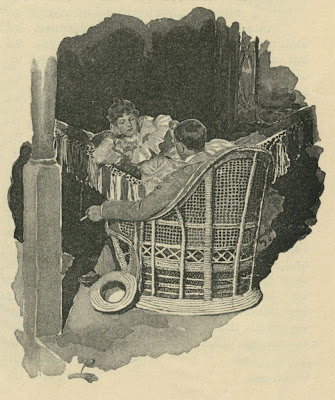 A long lost, modern, summertime scene from Howard Pyle. “The young fellow lounged in a rattan chair” illustrated his own story, “A Modern Magian,” published in the August 1894 issue of The Cosmopolitan. The original of this has yet to turn up, but Pyle made it and its companions with ink wash on paper, probably in February 1894.
Posted by Ian Schoenherr at 10:08 AM 1 comment:

Email ThisBlogThis!Share to TwitterShare to FacebookShare to Pinterest
Labels: 1894, Cosmopolitan, Modern
Newer Posts Older Posts Home
Subscribe to: Posts (Atom)
A blog devoted to all things having to do with Howard Pyle (1853-1911), the great American artist, author, and teacher. Brought to you by...