Study for “Life in an Old Dutch Town”

Howard Pyle’s 16.5 x 71" oil on canvas study for his mural “Life in an Old Dutch Town” (also known as “The First Settlement on Manhattan Island”) will be sold by Sloans & Kenyon Auctioneers and Appraisers in Bethesda, Maryland, this Sunday, September 20, 2015.

The finished mural was one of three Pyle painted for the Freeholders’ Room in the Hudson County Court House in Jersey City, New Jersey. (See this post for more information.)

Documentation on the murals is sorely lacking, but Pyle seems to have received the commission in February 1910; he then visited the courthouse in late March (no doubt to get a sense of the room and the lighting, and to take precise measurements of the spaces his murals would occupy), and he probably prepared and submitted studies for approval sometime that spring. His fee was reported to have been $15,000 for all three pictures, which would - ideally - be in place before the courthouse opened that fall.

Because the murals were longer than Pyle’s own Wilmington studio was wide, he commandeered two of the student studios next door, removed the wall between them, and - assisted to a large degree by Frank Schoonover and Stanley Arthurs - set to work painting the first mural at the end of May 1910.

“Peter Stuyvesant and the English Fleet” took up all of June and “Hendryk Hudson and the Half-Moon”, begun the first week of July, was completed in mid-August. Then, before beginning “Life in an Old Dutch Town”, Pyle seems to have spent two weeks either fine-tuning his study, or maybe even redoing it from scratch: a 1977 article in The Jersey Journal made the so far uncorroborated claim that Pyle “originally started to paint the interior of a Dutch inn taproom, using as a model the Bergen Room of the swank Union League Club in Downtown Jersey City” - but then changed his mind. Either way, as Pyle said to Arthurs and Schoonover in a letter of August 30, 1910, “The last picture that you will work upon is progressing, and will be ready for you on Thursday or Friday next [i.e. September 1st or 2nd].” And, indeed, on the 2nd, they “squared” (or gridded out) the canvas - some 7 feet high and 33 feet wide - and began transferring the image in charcoal from (no doubt) a similarly “squared” photo of Pyle’s study. Painting proper began on Monday, September 5th. 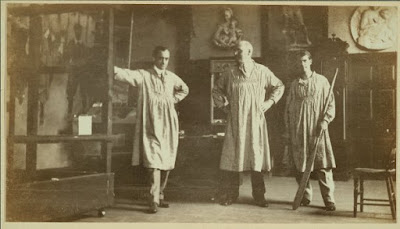 According to Schoonover’s daybook, the mural was finished - in a mere three weeks - on September 26th and it was packed for shipment on the 28th. It’s likely that on the 26th, 27th, or 28th Pyle had Joseph Pearce of Philadelphia come down to photograph the mural (in two exposures because of its extreme breadth) in the studio, where the lighting would have been brighter and more even than in the dim and shadowy Freeholders’ Room. Pearce’s photos (below) come from Cortlandt Schoonover’s Frank Schoonover: Illustrator of the North American Frontier (Watson-Guptill, 1976): the missing middle portion was cropped in the book; the other blank areas were left unpainted to accommodate brackets and the doorway.

But after installing “Life in an Old Dutch Town” in Jersey City in early October 1910, Pyle saw a major flaw in his scheme: the brick buildings were acting as visual roadblocks, interrupting the flow from one mural to the next. He must have then reworked the study to solve the problem and then used it once more as a guide in reworking the mural.

And so, what Pyle probably had anticipated to be a day or two of “touching up” turned into over a week of extensive, on-site repainting: replacing the seated folks and the buildings with water, sky, and a horizon line which more pleasingly linked the three murals together. (He also removed baskets from the woman to the right of the young couple and from the woman to the right of the center of the picture.) The mural was finished for good on October 13th or so - more than three weeks after the courthouse had officially opened.

Pyle copyrighted the mural on October 15, 1910, but it isn’t clear if he submitted Pearce’s photo(s) - with the buildings - or a photo of the reworked study. In the Library of Congress’ Catalogue of Copyright Entries it is described (likely by Pyle himself) as “Dutch of New Amsterdam. Street scene, number of people, of time of 1650, coming and going” - which doesn’t really help. It’s possible, too, that the reworked study was photographed before Pyle finished the mural, because the trees on the far right of the study are missing in the mural.

Be it chicken or egg, the study was photographed sometime within the next three months and reproduced in the catalogue of the 26th Annual Exhibition of the Architectural League of New York (January 29-February 18, 1911). 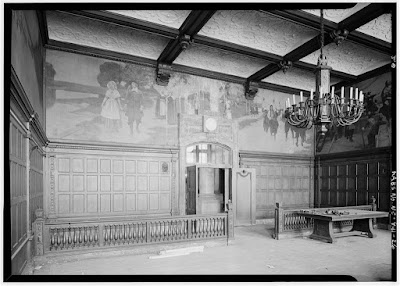 Decades later, when the courthouse faced demolition, the above photo of the Freeholders’ Room was taken which shows extensive water damage in the center of “Life in an Old Dutch Town”. But the building was saved and the murals were restored in the late 1970s - as seen in this blurry, cropped color photo from the book Heroes in the Fight for Beauty: The Muralists of the Hudson County Court House by Cynthia H. Sanford (Jersey City Museum, 1986) - coupled for comparison with Pearce’s photos. 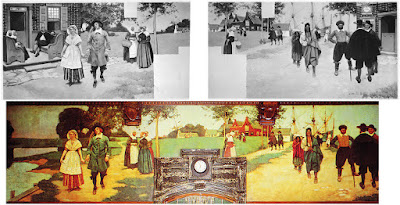 Since then, the murals may have been restored or cleaned: a photo taken just a few years ago by Leon Yost, shows that “ghosts” of the painted-out brick wall and basket have re-emerged. 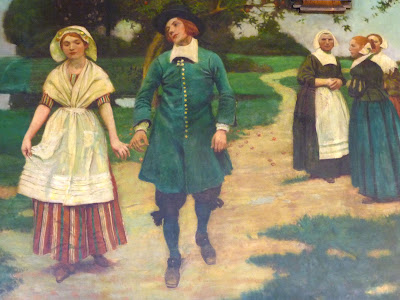 Now back to the study.

Six weeks after finishing the Hudson County Court House commission, Pyle sailed to Italy, never to return. The study, meanwhile - which, apart from the mural itself, is the last known Colonial scene Pyle ever painted - probably came back from the 1911 Architectural League show and sat in his studio or house for a time, and eventually it wound up with his second youngest child, Godfrey (1895-1959), who in turn, sold it to Francis and Laura (Bryn) Winslow of Chevy Chase, Maryland, whose family has held onto it until now. One grandson described its history this way:


My grandparents were friends of Howard Pyle’s son “Goff” Pyle (presumably that means Godfrey) because they used to go bird hunting together in Delaware in the 1930s and 1940s. In the mid-1940s, my grandparents noticed a rolled-up painting beside the couch in Goff Pyle’s house, asked about it, and bought it. They brought it home, framed it, hung it over the fireplace.


The study probably hadn’t been rolled up or reframed, after all, because the simple oak frame seen in the 1911 catalogue looks to be the same one in this 1949 photo.

However, as the later photo shows, sometime after being photographed for the 1911 catalogue, about 1.5 inches were cropped from the bottom of the study. Pyle himself may have done this so that it more closely resembled the finished mural - but if that had been his object, why didn’t he paint out the trees on the right of the study as he had done on the mural?

Confounding matters, the recent color photograph of the study (courtesy of Sloans & Kenyon) shows a few more differences from the 1911 catalogue photo (shown together, above): the trees on the far right, although present, are changed, and a small patch of sky between the young couple (also seen in both photos of the mural) has reappeared. Also, the absence of the windmill’s blades in the center of the picture - and the presence of the small triangle of dark blue water on the far right - may indicate that parts of the study were painted over by Pyle after the 1911 catalogue photo was taken, or by someone else after Pyle’s death. And, as seen in Mr. Yost’s photo of the mural, parts of the brick wall and one of the baskets have re-emerged in the study, perhaps because of fugitive pigments or too rigorous a cleaning.

Even so, Pyle’s study is particularly striking and is stronger both conceptually and compositionally than its enormous counterpart. The latter, of course, was hastily painted - and hastily repainted - and although Pyle knew parts of it had to be cut away for the brackets and doorway, he seems not to have taken this into account when arranging his composition: why, for example, would he crop that pair of women at the knees? The mural was also not the work of Pyle alone: as with the other two, Schoonover and Arthurs had painted much of the canvas. N. C. Wyeth had a point when, in referring to “Peter Stuyvesant and the English Fleet”, he complained:


...Schoonover and Arthurs are painting the decoration for him to considerable extent. Now this is permissible providing they carry the work only through the preliminary stages, and then the master, in seclusion with his whole soul, waves his magic wand and lifts the mass of rudimentary paint and masses into living, virile or personal expressions.


But Pyle - chasing an almost impossible deadline - just didn’t have the time to do that. The study, however, does him great credit - and here’s hoping it finds a good home. 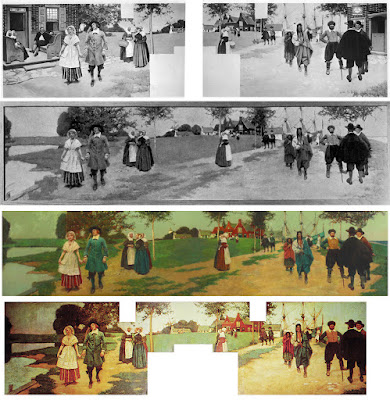