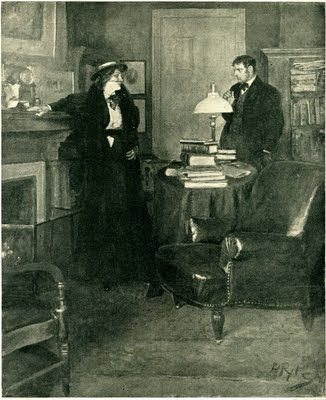 My interest in Howard Pyle owes a lot to my interest in Arthur Conan Doyle. When I was 11 or 12, I became obsessed with Sherlock Holmes and soon began collecting everything I could find - and afford - that had even the slightest mention of either the character or his creator (and of course by “creator” I mean “Dr. Watson’s Literary Agent”).

A few years in, I bought a bound volume of Harper’s Monthly from 1893 because it contained the serialization of Conan Doyle’s The Refugees with illustrations by Thure de Thulstrup. Although I didn’t read the novel nor did I find de Thulstrup’s illustrations that intriguing, I was drawn to - and kept revisiting - some other pictures in the book and I wanted to find more pictures and to learn more about their maker, Howard Pyle. So I did, and near my Sherlock Holmes-Conan Doyle shelves a little “Pyle pile” started to form.

Some of my initial Pyle purchases were “crossover” items like that bound Harper’s Monthly, or Collier’s cheap editions of The Green Flag, or the only two Conan Doyle pieces ever illustrated by Pyle - the novella The Parasite and the poem “A Forgotten Tale” - but, before long, my Pyle obsession had superseded all others.

Still, I’ve never completely shaken my initial addiction, and I often wonder what Howard Pyle’s illustrations for the Sherlock Holmes stories - or for Conan Doyle’s historical fiction - would have been like. I also wonder if the two ever met or corresponded: after all, the publication of Pyle’s Conan Doyle illustrations coincided with the latter’s visit to America in the fall of 1894, where he met a number of people Pyle knew. But, so far, I’ve come up with nothing.

Shown here is one of Pyle’s four illustrations for The Parasite, which was serialized in Harper’s Weekly. This piece - “‘Austin,’ she said, ‘I have come to tell you our engagement is at an end’” - appeared in the November 10, 1894, issue and the 10.2 x 8.4" halftone engraving was by William Kurtz. I think it hints bittersweetly at what could have been, if only Harper & Brothers had picked Pyle instead of (meh!) William Henry Hyde to illustrate the miscellaneous Sherlock Holmes tales published in the Weekly in 1893.
Posted by Ian Schoenherr at 10:42 AM

This illustration of a possessed Agatha threatening to leave Austin was one of many things which inspired me to adapt The Parasite into a short film as my thesis project for the David Lynch Master's in Film program.

Over a century after its publication, this Doyle story remains as provocative as ever. It was great fun for us to turn it into a movie.