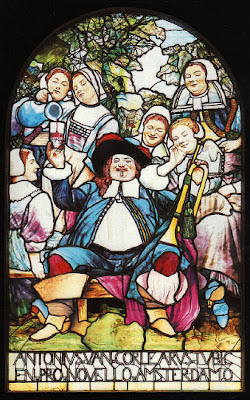 In 1893, Howard Pyle designed a stained-glass window which was to be fabricated by the Tiffany Glass and Decorating Company.

“Designed” might not be the precise word: Pyle didn’t so much design the window as paint a picture that was, in essence, “translated” by Tiffany’s stained-glass artisans.

The window was destined for - and, presumably, commissioned by - the Colonial Club of New York, which had moved into a handsome new building on Broadway and 72nd Street the previous year. The subject was Anthony Van Corlaer, and the work has generally been known by the title “Antony Van Corlear [sic], the Trumpeter of New Amsterdam”. Then again, it could be argued that the “official” title is that which Pyle lettered on the work itself:

(That title might not be too reliable, however: “My Latin is very loose,” Pyle later wrote (in reference to a mistake in the first printing of his Story of King Arthur), “and I am afraid that I always depend too much on the text reader to help me with that - as well as with my dreadful spelling.”)

At any rate, Pyle seems to have been proud of his painting: on March 18, 1893 he welcomed invited guests to his Wilmington studio to take a look at it before it was shipped off. It was subsequently shown at the Tiffany studios, 333 Fourth Avenue, New York, February 25-26, 1897, and at the First Annual Exhibition of the Pittsburgh Chapter of the American Institute of Architects, May 2-31, 1898.

But the painting has since gone missing. We can take a look at it, however, courtesy of an article on “Window Making as an Art” by William H. Thomas in The Munsey Magazine for December 1901. 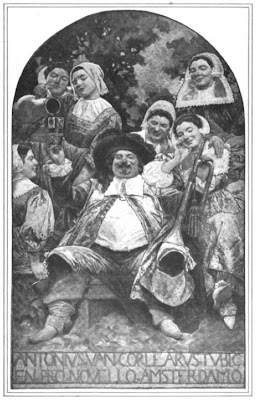 Granted, it’s in black and white, but at least we can see the general scheme - not to mention a great many of the painterly details that were “lost in translation” - perhaps because they were deemed unnecessary or impossible to replicate in glass. (Note, for instance, Pyle’s rendering of the boots.)

The window was completed and installed in a Colonial Club stairway sometime that year or the next. The American Architect and Building News for December 29, 1894 described it thus:


At the head of the first flight is a Tiffany window, quite expressive of the Club - Antony Van Corlear sits jovial, surrounded by laughing maidens, who fill his glass and flatter his bachelor vanity, while in the tablets on either side we read the tale, as set forth in the “Knickerbocker’s History”:

“But it was a moving sight
To see ye buxom lasses;
How they hung about ye Doughty
Antony Van Corlear;
For he was a jolly rosy-faced
Lusty bachelor
Fond of his joke and withal
A desperate rogue among ye women!”

A humorous and pleasing thing to greet one on entering the Club!

But in 1903 the clubhouse went into foreclosure and over the next century the building underwent a series of modifications and renovations before ultimately being demolished in 2007.

Fortunately, the window weathered these storms: somewhere along the line it was removed and on March 30, 1984 it was auctioned by Christie’s in New York and purchased by the Delaware Art Museum. It measures 65.5 x 39.5 inches, and Pyle’s painting most likely is - or was - of similar dimensions. Maybe it weathered some storms, too, and will show up one day.
Posted by Ian Schoenherr at 9:40 PM

Interesting find, but I can't help but note how mismatched the stylistic transition here is. The roguish, Falstaffian central character seems to turn to a boyish Apollonian figure of pure morals... as the jaunty illustration turns to a work of decorative glass. It would make sense to me if this collaboration was not repeated at a later date.

Yeah - I have no idea what Pyle thought of the finished product. He did design at least one other window - in 1909 - and in that case he asked Cass Gilbert to recommend a "stained glass window maker of ability who can give me a quotation of a reasonable price". So it seems that Tiffany wasn't his first choice - maybe because they were too expensive or didn't quite catch the spirit of Corlaer. However, it's thought that Tiffany wound up making it (but I don't yet know that for sure - still checking).

The stained glass was restored by The Greenland Studio in NYC