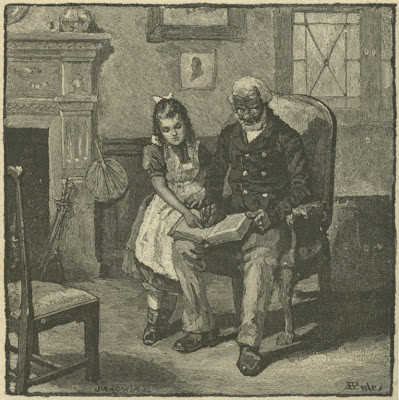 “Work is beginning to roll in upon me at last, and at last I think I have ‘struck pan,’” wrote Howard Pyle to his mother on February 28, 1878 - 135 years ago today. “My work is beginning to pay better too and I think before long I shall be able to pay off my debts to father in toto.”

Although I haven’t yet been able to find another use of Pyle’s idiom “struck pan” - it’s clearly a hybrid gold-mining term, somewhere between “struck pay dirt” and “pan out”.

Anyway, after over a year of living in New York, the 24-year-old Pyle had finally found himself making real headway as an illustrator. He credited his “A Wreck in the Offing!” as having “really launched me” - The Book Buyer for October 1888 said of it, “This drawing was published as a double-page engraving in Harper’s Weekly, and brought Mr. Pyle at once into prominence.”

But let’s let Pyle himself explain some of the work that he had been doing soon after his “first success” - and apologies in advance for his unfortunate racial slur:


I have just finished a picture for Harper’s Monthly of an old darky giving a lecture to a naughty little girl. It was quite a success and they are going to put it into the hands of the best engraver in New York City, Mr. Smithwick. They gave me two pictures to do for them in illustration to a most excellent story of modern Spanish life. They are beyond all comparison the best things I have ever done. I don’t think I am as a general rule inclined to be “cock almighty” about my work but for these two designs I can say that they are so far beyond anything I have ever done before that I can hardly realize their being my own work. They are not finished yet, but so far every touch I have put on them has improved them. 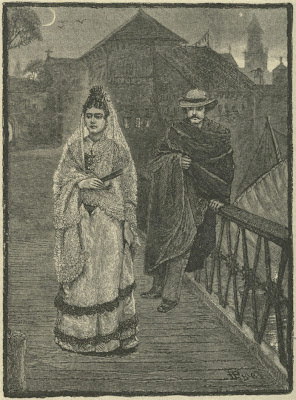 “She went by without looking at him”


The first one represents a Spanish caballero standing against the side of a bridge looking after his Dulcinea whom he has mortally offended by a lampoon written in a fit of jealousy. She is “soaring” past him with a scornful expression on her face and he is looking after her in a beseeching way. The scene is early morning and I think I have gotten a real feeling of early sunlight in the picture. I borrowed a Spanish cloak from an artist friend of mine that almost entirely covers the modern European dress and which with the addition of a sombrero gives him quite a picturesque look. I hired a Spanish woman’s costume in which I posed my female model Jenny Watts, a very pretty ladylike girl, and I tell you, she cut quite a shine! 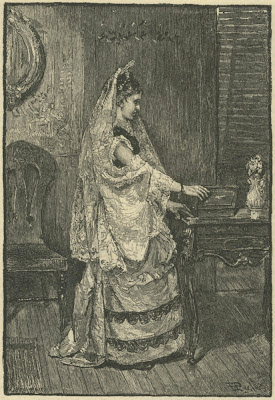 
The story goes on to say that after having thus mortally offended his sweetheart and being for some time unable to regain her love the cavalier finally succeeds by sending her a casket. In the casket was the pen with which he had written, broken; under the pen, a sheet of paper where was written in his blood “Retribution,” and under the paper his right hand. This, of course, “dropped” the girl. A very effective dénouement, I think. The scene I took for illustration was when she is just opening the box, or rather, had just opened it, the horror not yet fully dawned upon her mind. This was Mr. Alden’s suggestion. And I have made an illustration that some of my artist friends say shows not only talent but genius - I only hope it is so. Mr. Abbey says it is one of the best things that have been done in New York illustrating.

By the way, “The little pink finger and the huge black index came to a full stop under this commandment” was engraved, in the end, by Frederick Juengling, not John G. Smithwick, and published in Harper’s Monthly for July 1878. It illustrated “Daddy Will: A Glimpse of Ancient Dixie” by Charles D. Deshler. Pyle’s original black and white gouache painting showed up on the market in 2006, I think. And “She went by without looking at him” and “Fermina opens the casket” illustrated “Manuel Menendez” by Charles Carroll in Harper’s Monthly for August 1878.
Posted by Ian Schoenherr at 6:11 PM