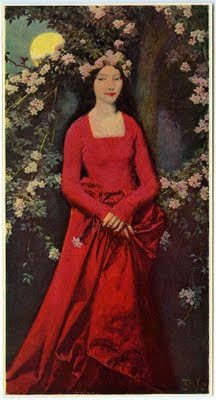 “Catherine de Vaucelles, in her garden” by Howard Pyle (1904)

What do you think of this Howard Pyle painting? It’s not so bad, right? It’s hard to see in this off-register plate, but it’s got its strengths: the dress and the blossoms are handled nicely, the composition and color are interesting... Aren’t they?

I’ve shown this one before. In The New York Times Saturday Review of Books for October 22, 1904, it was singled out for some stinging criticism:


Here we have the picture of a Japanese doll, and - was ever such a thing heard of? - the doll has goitre. Not as yet a fully developed case; but it’s there, and is quite pronounced. The face is a blank wall; but there - dolls’ faces generally are devoid of expression. Some of the material left over from constructing the gown has been utilised in building a mouth. Was the moon an afterthought? It would seem so, for it is not night. Apple blossoms don't look like that by moonlight; neither does a red dress. At any rate, putting the moon there was a lucky hit - we might almost say an inspiration - for it draws the eye away from the doll-faced woman.

In fairness to Pyle, the above comments reflect more on the relatively primitive reproduction than on the painting itself. So it would help to see the original oil on canvas.

If only. It turns out that Pyle wasn’t very pleased with it, either. Yesterday, looking in one of Pyle’s scrapbooks at the Delaware Art Museum’s library I found “Catherine de Vaucelles, in her garden” and underneath the plate, his secretary Gertrude Brincklé had written: “Destroyed by H.P.”

Posted by Ian Schoenherr at 7:47 AM

I'd hate to think he destroyed it after reading the harsh criticism...

I tend to think snarky comments like that wouldn't have induced Pyle to scrap a finished painting - but who knows? He could be impulsive sometimes.