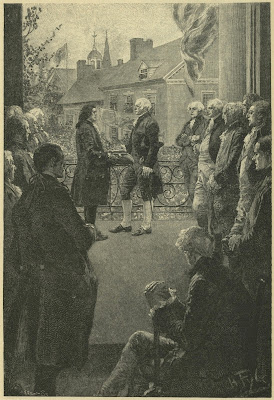 “The Inauguration” by Howard Pyle, engraved by F. S. King

Today marks the 224th anniversary of George Washington’s first inauguration as president of the United States. The ceremony was held April 30, 1789, on the balcony of Federal Hall on Wall Street in the city of New York - then the new nation’s capitol.

Howard Pyle pictured this great event at least twice. He painted his first version, evidently, in the summer of 1888, not long after finishing his children’s book Otto of the Silver Hand. The black and white oil painting (about 23.5 x 16 inches) was then engraved on wood by Francis Scott King (1850-1913) and appeared in John Bach McMaster’s article “Washington’s Inauguration” in Harper’s New Monthly Magazine for April 1889.

At the same time the magazine was on the newsstands, Pyle’s painting was exhibited at the Centennial Celebration of the Inauguration of George Washington as First President of the United States at the Metropolitan Opera House in New York City, from April 17 to May 8, 1889. Eventually, it wound up in the hands of collector William F. Gable, then it was auctioned by Freeman’s in Philadelphia in 1932, and ultimately it wound up at The Mint Museum, University of North Carolina at Charlotte. 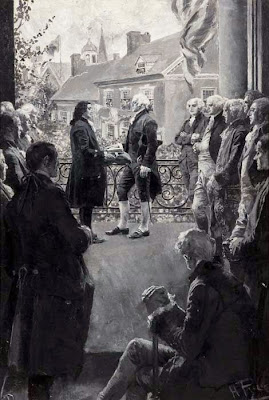 “The Inauguration” by Howard Pyle, via The Mint Museum

About a dozen years later, Pyle revisited the scene, ostensibly for Woodrow Wilson’s “Colonies and Nations,” then being serialized - and accompanied by 21 Pyle pictures - in Harper’s Monthly Magazine. In a March 28, 1901, letter to Wilson, Pyle suggested it as an illustration and explained: “I have already made an illustration for it for McMaster’s article, but I think I could represent the street in front of the old State House, a crowd of people and Washington on the balcony.”

Wilson approved of the idea and Pyle likely painted it sometime in April or May. For some unknown reason, however, it wasn’t reproduced in the magazine; rather, it appeared in the expanded, book version of Wilson’s articles, titled A History of the American People, published by Harper and Brothers in October 1902. Pyle’s black and white oil (23.5 x 15.5 inches) now belongs to the Delaware Art Museum. 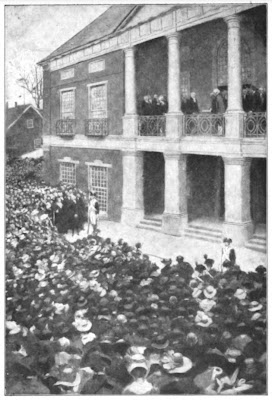 “Inauguration of Washington at New York” by Howard Pyle
Posted by Ian Schoenherr at 6:39 PM