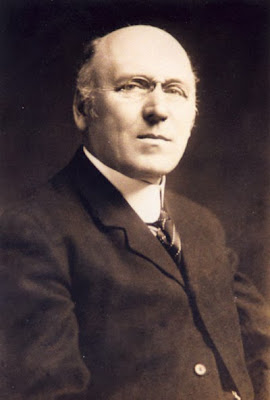 In honor of Howard Pyle’s 161st birthday, here are a few kind words from some of his friends and admirers:

“You write about a beautiful sheet in the Graphic by Howard Pyle. If you mean a composition that reminds one of Terborch or Nicolaas Keyzer - ‘Penn and the Colonists’ - yes, I was struck by it too, so much so that I have ordered the issue. Yes, it is a damned fine thing.” (Vincent Van Gogh to Anthon Ridder van Rappard, c.May 9, 1883)

“It was not so much the actual things he taught us as contact with his personality that really counted. Somehow after a talk with him you felt inspired to go out and do great things, and wondered afterwards by what magic he did it” (Maxfield Parrish to Richard Wayne Lykes, March 28, 1945)

“I haven’t before had a chance to express to you my very heart felt admiration for your noble series of illustrations for my ‘Washington.’ They dignify and illuminate the work in every way.” (Woodrow Wilson to Howard Pyle, October 27, 1896)

“The virility and poetry and the beauty of it are remarkable” (Augustus Saint-Gaudens to Howard Pyle, June 20, 1902)

“It was a great idea, a fortunate idea, to re-write the Round Table Tales, & I am your grateful servant. You are giving them a new charm & grace & beauty; they have gained, not lost, under your hand. They were never so finely told in prose before. And then the pictures - one can never tire of examining them & studying them. Long ago you made the best Robin Hood that was ever written, & your Morté d’Arthur is going to be another masterpiece. It was a great idea; I am glad it was born to you.” (Samuel L. Clemens to Howard Pyle, January 1, 1903)

“Will Mr. Howard Pyle accept through me the love of seven big and little children to whom he taught the beauty of language and of line, and to whom, in a desert place, he sent the precious message of Romance.” (Willa Cather inscription to Howard Pyle in The Troll Garden, April 26, 1906)

“Eleven and twelve years old we were, most of us, but I’ll wager no one of us has forgotten him, no one of us but has looked back on those wintry afternoons in the pleasant fire-lighted studio many times, realizing how vital a part of our background, literary and artistic, it has become. I was at boarding school when the news of his death in Florence reached me, and I knew then I had lost a very real friend.” (Virginia Kirkus in The Horn Book Magazine, November 1929)

“One of the very best men I know anywhere, one of the pleasantest companions, stanchest friends, and best citizens, is Mr. Howard Pyle, the artist.” (Theodore Roosevelt to Gifford Pinchot, September 9, 1907)

“I think that pirate duel is the most terrific thing I ever saw. I had almost all the sensations I have enjoyed at a prize fight. Oh if I were only a pluto I’d have that in the middle of my shack and when I wanted to be lifted out of the dreary run of existence I would take a look.” (Frederic Remington to Howard Pyle, November 13, 1908)

“There are many in this world who radiate the feeling of love and earnestness of purpose, but who have not the faculty or power to impart the rudiments of accomplishment. There is nothing in this world to inspire the integrity of youth like the combined strength of spirituality and practical headway. It gives the young student a definite clew, as it were, to the usefulness of being upright and earnest. Howard Pyle abounded in this combined power, and lavished it upon all who were serious.” (N. C. Wyeth in The Christian Science Monitor. November 13, 1912)

“I myself have always wondered that more people were not affected by Mr. Pyle’s piercing fineness of spiritual vision.... I don’t know any other American who had his extraordinary combination of fine qualities.” (Dorothy Canfield Fisher to Charles David Abbott, May 20, 1925)

“The battle picture at St. Paul is absolutely one of the most remarkable pictures of modern times.... You, of course, know of Mr. Pyle’s work through his illustrations, but unless you know the man personally you cannot realize what a perfectly charming fellow he is and how very beautiful and strong his paintings. He seems to cover a very wide range of subjects with absolute surety, and while preserving historic detail he never loses vitality and intense personal quality, while his sense of the decorative and the picturesque is most remarkable.” (Cass Gilbert to Ralph Adams Cram, December 31, 1907)

“It is quite unnecessary for you to talk to me about Howard Pyle, for there is no man in the United States for whom I have a more profound admiration.” (Ralph Adams Cram to Cass Gilbert, January 2, 1908)

“I have never valued a friend more.” (William Dean Howells to Gertrude Brincklé, October 17, 1919)
Posted by Ian Schoenherr at 11:49 AM