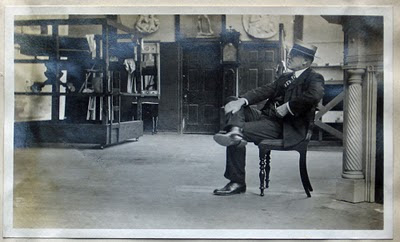 What was Howard Pyle doing exactly 100 years ago?

Why, painting like mad on "Peter Stuyvesant and the English Fleet" (also known as "Coming of the English"). Seven feet high and almost twenty-five feet long, it was his largest picture to date.

The commission, arranged by his friend Frank Millet, had come in the winter of 1910: Pyle was to produce this and two other, even larger murals, plus two smaller pictures for the Hudson County Court House in Jersey City, New Jersey, before it opened in late summer.

It was an awfully tight schedule, but Pyle had been desperate to get just this kind of work, so it was worth the struggle. Adding to the burden, however, was a looming deadline with Charles Scribner's Sons to deliver the fourth and final volume of his Arthuriad, The Story of the Grail and the Passing of Arthur, set to be published that fall.

But Pyle was able to keep the book more or less on track and do his research and make careful, detailed preparatory studies for the murals. As the enormous canvases wouldn't fit in his own studio, he took over one of the three students' studios next door. He also hired his trusted disciples, Stanley Arthurs and Frank Schoonover, to help him.

By June 1, 1910, the trio had begun working on "Stuyvesant" at a feverish pace. Near month's end, Schoonover took the two photographs of Pyle shown here. 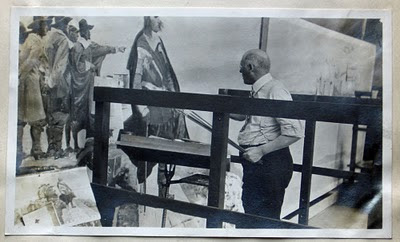 "What a pity to throw away such an opportunity," wrote N. C. Wyeth on July 4, soon after seeing Pyle and the Stuyvesant mural "which was completed, COMPLETED, I say, in one month and a day - and he brags about it!" Wyeth complained that "the picture is no decoration - not even a good illustration, that it is terribly unfinished and ill-considered from an artistic standpoint. No thought, of the higher quality, was attempted on the canvas. A shell of delineation, absolutely nothing else. Not even good drawing!" He also denounced the involvement of Arthurs and Schoonover, who he believed had done a little too much of the heavy lifting.

Notwithstanding, Pyle and the "Boys" (as he called them) attacked the second mural, "Hendryk Hudson and the Half-Moon," at the same breakneck speed. By mid-August Pyle had shipped it and "Stuyvesant" to Jersey City for installation and retouching. The Jersey Journal for December 8, 1977, describes what happened next:


He sent them on ahead, arriving several days after the murals.

Pyle found that the murals had already been placed on the wall and that two holes had been cut in each to accommodate ventilators. On top of that a four-inch strip of moulding had been placed around the Stuyvesant mural instead of a two inch strip. The four-inch strip covered his signature. He complained bitterly to Hugh Roberts, [the] architect, who told Pyle that his signature was small and that the workmen never noticed it.

Pyle and Roberts "had words" according to witnesses, but Millet stepped in and smoothed things over. Pyle then signed his name in letters four inches high, saying that Roberts could see the letters without his glasses. The mural is believed to be the only Pyle mural with double signatures.

Really, the signature trouble was a minor annoyance compared to the other issue, as seen in this simulated before-and-after of "Stuyvesant":

Here it is in context. (More photos of the place are here.)

Of course, Pyle would have radically changed his composition had he been informed of the pending duct work. In reviewing the building, Architects’ and Builders’ Magazine for November 1910 lamented, "In the Freeholders’ room, the charm of which beggars description, the marring of the magnificent mural decorations by ventilator openings is most regrettable, and should have been avoided at any cost."

Incidentally, adding insult to injury, dark brown drips of dirty water (or something) were oozing down the pictures from the vents when I saw them last, about ten years ago.

And I should say here that while I admit I'm genetically predisposed to like super-oblong pictures, I disagree with Wyeth's above assessment. I think "Stuyvesant" - and "Hendryk Hudson" for that matter - are strongly composed, nicely realized, and refreshingly different from many murals of the era which are often packed with idealized figures, statically posed in shallow space.

On the other hand, Wyeth's criticisms could apply to the third and biggest mural, "Life in an Old Dutch Town," which is far from Pyle at his best. As it happened, it went up weeks after the courthouse opened, and, for all Pyle's prepping, he made costly eleventh-hour changes to it.

"I think they are fairly good in certain ways, but are not so decorative as I hoped they would be," Pyle summed up to fellow artist Edwin Howland Blashfield (and he later told Arthurs that he had "lost money" on the deal, though I haven't checked his math). Frank Millet more bluntly confided (also to Blashfield), "Pyle’s things are a great disappointment to the architect and Mr. Gill [the contractor for the interior work]. I say nothing, but I think he has made a mistake in his scheme and in his color."

Well, maybe. Two out of three ain't bad, I say. And perhaps Pyle's wrathful ventilator venting poisoned the opinions of Roberts and Gill.

Not long after the end of the project, in November 1910, Pyle sailed to Italy to better prepare himself for the next mural commission - which never came.
Posted by Ian Schoenherr at 1:40 PM

That "Boat Ahoy" picture from last week knocked my socks off!

I must admit, these late murals are not my favorite of Pyle's works, and I think they are a fall-off in quality from his earlier murals. I think they lack inspiration and power for some reason. And as much as some of N.C. Wyeth's carping against Pyle sometimes seems immature or petty or ingrateful, I think he's spot on here. Pyle created hundreds of better compositions than these. On a good day, Pyle could shake ten better compositions out of his sleeve.

It seems really strange that Pyle spent an entire year abroad after this mural commission was completed. I can't help feeling, in some measure, he was in flight.