Decoration for “A Song of Peace” 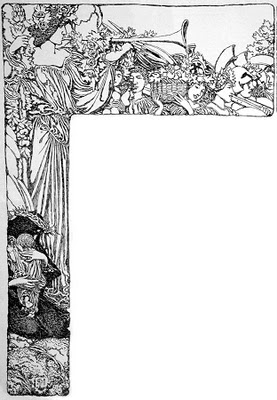 Howard Pyle’s “decoration” for Edwin Markham’s poem, “A Song of Peace,” appeared in Collier’s Weekly for June 14, 1902. And 108 years ago today - on June 20, 1902 - Augustus Saint-Gaudens wrote a “fan” letter to Pyle (not the first time, either) about this piece, declaring, “…The virility and poetry and the beauty of it are remarkable…”

Unfortunately, Saint-Gaudens’ letter has gone missing and the only evidence of it we have is the above line, quoted by Charles Abbott in his 1925 Pyle biography. Pyle’s reply, however, written on June 24, resides at Dartmouth College. In it, he offers to give the drawing to Saint-Gaudens and asks if he should “fill it out to a large square, completing the figures in procession.” Pyle sent the drawing in July, but I don’t know if he reworked it - or if it was burned in the sculptor’s studio fire in 1904 - as it has yet to come to light.

Note: Since writing this I’ve learned that the drawing was loaned by Mrs. Augusta Saint-Gaudens to the Detroit Institute of Arts in 1922, so perhaps it’s still out there, somewhere.
Posted by Ian Schoenherr at 11:59 AM