What, Do You Think You’re Dewing? 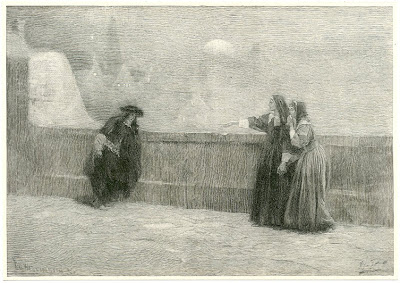 “Thereupon the poor woman screamed aloud, and cried out that he was a Murderer” from the short story “Retribution” by Howard Pyle in Harper's New Monthly Magazine for April 1893.

This bears more than just a superficial resemblance to Thomas Wilmer Dewing at his ethereal foggiest. Of course, the overall effect owes much to the wood engraver F. H. Wellington, who may well have struggled to capture Pyle’s subtle shifts in tone on a 6.8 x 4.8" block. But still...

One day the original black and white oil will surface and then we can really see how it compares with, for example, Dewing’s “Summer” (1890) or “The Song” of 1891, or “In the Garden” (1892-94). The two artists had friends in common and must have been aware of each other’s work, but I have yet to find evidence that puts them in the same place at the same time.
Posted by Ian Schoenherr at 8:37 AM