Almost, but not quite - as you'll discover when you read the accompanying, oddly-metered verse. "Jeremy Black's Fourth of July" by Howard Pyle appeared in Harper's Young People for July 5, 1881 (the issue, unlike this post, was wisely published before Independence Day). As far as I know, it never came out in book form, though it was later reprinted in The Albany Evening Journal for July 27, 1901. July 27th? Now I don't feel so bad.

I've always loved this unusual drawing and its scratchily confident lightness of touch, compared to Pyle's somewhat heavier, or more "deliberate" pen-and-inks for Robin Hood and Pepper and Salt, which began to emerge from his studio a few years later. It's similar to the one for - and dates from the nearly the same time as - A Perfect Christmas, but it's also very A. B. Frost-y and shows that Pyle was indeed influenced by his good friend and the best man at his recent nuptials (i.e. April 12, 1881).

If only vuvuzelas or lepatatas (if you prefer) sounded like the Thing, we all would be much happier. 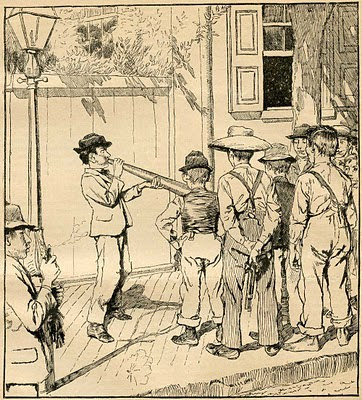 "I'll make a noise," said Jeremy Black,
As the days drew nigh
To the Fourth of July;
"I'll make more noise than a cannon, or pack
Of fire-crackers, or pistol, or gun,
Or cannon-cracker; I'll have more fun,
With fifty cents, than the rest of the boys
With a dollar's worth of powder and things -
With fifty cents I will make more noise
Than all the rest of the town, by jings!"

So he went down
To Abraham Brown,
The tinker back of the Blue Bell Inn,
Who mended the pans for all the town,
And he got him to make a Thing of tin.
Then both of them tinkered and talked and planned,
Between the mending of pot and kettle,
And drew the patterns with chalk in hand,
Until they managed the thing to settle;
And all the boys were eager to know
What kind of a Thing they kept tinkering so.
Was it anything like a cannon, or rocket.
Or Roman candle, or pin-wheel, or gun?
Was it small enough to go into his pocket?
Or could he lift it when it was done?
Would the thing go off, or would powder go in it?
And a dozen of such like questions a minute.
But Jeremy Black just gave a sly wink,
And they could not tell what in creation to think.

So Fourth of July came around at last,
And the day was fresh and the sun was bright;
Then just as soon as the night was passed,
At the earliest dawn of the dewy light,
The boys turned out
With noise and rout,
And loud halloo and lusty shout,
And racket of crackers, and boom and pop,
And ringing of bells, and sizz and splutter,
Till good folks trying to sleep would stop,
And get up and close the window and shutter.
But Jeremy Black just turned in his bed,
And down in the pillow he nestled his head,
And thought, with a grin,
How the Thing of tin
Would make enough noise to drown the din.
At length he arose and dressed himself.
And afterward managed his breakfast to eat;
Then took the Thing from the wood-house shelf,
And carried it with him out in the street.
Now all the boys came running to see
What ever the wonderful Thing could be -
And, lo! 'twas a fish-horn six feet long.
"Now stand a little away," said he,
"And you'll hear a noise so loud and strong
And deep and mighty that it will drown
All popping of guns and cannons in town."
Then all the boys stood back, while he
Stepped up to the fire-plug under the tree,
And rested thereon the end of the horn,
Then took a breath that was long and deep,
And blew as he'd not blown since he was born;
And out from the Thing came - never a peep!
He stopped, and wiped his mouth for a minute,
Then blew as if the dickens were in it.
He blew till the hair stood up on his head;
He blew till everything swam around;
He blew till his forehead and ears grew red;
But out of the horn came - never a sound.

At first the boys were half afraid
Of the terrible sound that would soon be made;
But after a while they began to chaff,
And then to giggle, and then to laugh.
Poor Jeremy knew that the noise was there -
It only required a little more air.
Once more he blows, till his muscles strain:
Not a sound. And then he began to know,
Though he had endeavored with might and main,
The horn was too large for him to blow.

As one goes over this world of ours
One frequently finds a Jeremy Black,
Who overrates the natural powers
The Fates have granted him - somewhat slack.
Those people who build, though they may not know it,
A horn so large that they never can blow it.
Posted by Ian Schoenherr at 6:54 PM