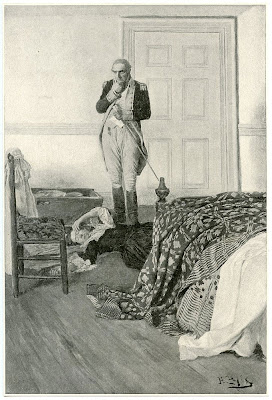 While the 1898 Drexel Institute Summer School of Illustration dominated Howard Pyle’s time, he had still commissions to fill. In addition to work for Harper and Brothers (and, quite likely, Collier’s Weekly), Pyle needed to press on with his ambitious series of paintings for “The Story of the Revolution” by Henry Cabot Lodge, then running in Scribner’s Magazine. He made twelve pictures in all and although they were printed in black and white, he painted them somewhat larger than usual and in full-color (in hopes that they would be purchased en masse and hung in the new Library of Congress building in Washington - which unfortunately never happened).

Some of the set are well known, some not so much. “Arnold Tells his Wife of the Discovery of his Treason” is one of the latter category, unjustly, perhaps, but understandably, compared to the dynamically sweeping likes of “The Battle of Bunker Hill” and “The Battle of Germantown” (a.k.a. “The Attack Upon Chew House”). On August 2, 1898, Pyle wrote to Joseph Hawley Chapin, then Scribner’s relatively new art editor:


…After many delays and a great deal of worry on my part, I am sending you today my picture of Benedict Arnold. I trust you may find it to your mind, for I have expended much thought and great care upon it. I think it has some dramatic intent.

It represents the scene where Arnold, having received the letter acquainting him with the capture of André, tells his wife of his discovered treason and of the necessity of his immediate escape. She sinks fainting at his feet and he stands over her contemplating the ruin of his own life. In this moment of despair and ruin the supreme egotism of the man was very apparent. The account says he stopped only a moment to raise his unconscious wife and to lay her upon the bed, then without calling for assistance or giving any further aid to her he went down stairs, bade adieu to his guests at the breakfast table, mounted a horse belonging to one of his guests and rode away to where his boat was waiting to carry him to the English sloop-of-war, Vulture.

I’m under the impression that Pyle's brother Walter's owned this, but now the original (36 x 23.75") belongs to the Brandywine River Museum, just down the road from where it was painted in Chadds Ford, Pennsylvania.
Posted by Ian Schoenherr at 6:53 PM

I was just at the Brandywine, but I don't remember seeing this picture. A shame, because I would have liked to of compared my memory of it to this reproduction.

If you go to this site, you'll find a kind of blurry and dark photo of the original. I can't tell how accurate it is, but at least it hints at the color: