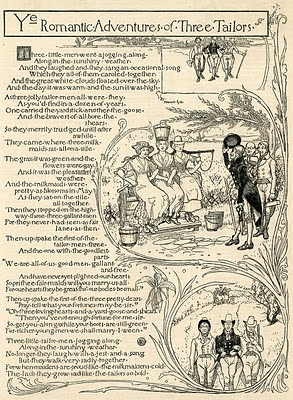 “On Saturday I resumed work upon the illustrated verse. It progresses much more slowly than I had hoped. The printing of the letters of the text takes a long time and I had several setbacks through mistakes.”

So said Howard Pyle in a letter to his wife, Anne (then at her family's “cottage” in Rehoboth, Delaware), on Sunday, August 5, 1883. The “illustrated verse” to which he refers was, I assume, “Ye Romantic Adventures of Three Tailors,” the first in a series ultimately collected in the book Pepper and Salt in 1885. (The “mistakes” didn’t include reversed apostrophes, apparently.)

The idea for the series had come to Pyle a few weeks before: on July 8 he told Anne:


I wrote a verse for Harper’s Young People which I propose making into a full page. If Harpers should take to it, as I hope they will, I propose writing a number of similar bits (say fifty) and turning them into a child’s gift book next Christmas a year, first publishing them in Young People.


He updated her on August 3:


This morning I started drawing that series of full-page pictures with verses that I hope to do for Young People, to be published ultimately in book form. I told you yesterday how I hammered away at the verses and only hit one late in the afternoon. I hope that they may be successful: I did hard conscientious work today but got only a very little done.... This afternoon I had a sort of discouraged fit, for the work I was doing seemed so puerile and childish but I feel differently now, for after all no work conscientiously done is “childish”...

As Pyle had already started the illustration, he was probably “hammering away” at subsequent verses (for “Two Opinions,” say, or “A Victim to Science,” the next to be published). “Ye Romantic Adventures of Three Tailors” appeared in Harper’s Young People for August 28, 1883, which actually came out about a week earlier, say August 21 or 22, so only about two weeks would have been allowed for production: photo-engraving the plate, printing, stitch-binding the covers, packing, and shipping the magazine. An awfully tight, but entirely possible schedule for Harper and Brothers, which had its own printing plant and bindery on the premises at Franklin Square.
Posted by Ian Schoenherr at 5:10 PM