“Is that Howard Pyle?” 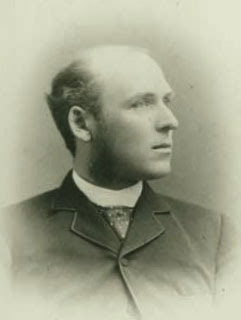 In December 1887, Edwin Wilson Morse, editor of The Book Buyer (“A Summary of American and Foreign Literature” published by Charles Scribner’s Sons), asked Howard Pyle to send a photograph of himself for use in the magazine.

“It has been years since I have had one taken,” Pyle replied on December 11, “but spurred by the compliment of your request I will visit a gallery at the very earliest opportunity and send you the result as soon as I receive it.”

When exactly Pyle visited a photographer is not known, but we do know that it was a little before January 18, 1888, when he wrote to a Mrs. Dickinson of Wisconsin:


A long while ago - March of last year - you wrote me a letter asking me for my photograph and autograph. My neglect to answer immediately arose not from indifference toward your request but because I had had no photograph taken for so long a time that I felt a reluctance to having myself projected upon material card-board, fearing the result. At last, however, I have had it done and such as it is I send it to you. I imagen to myself the little ones looking at it far away in Wisconsin. “What!” they cry, “is that Howard Pyle? Why; he is bald! He is grey! and - yes - if one looks closely enough one finds lines at the corners of his eyes that the photographer has forgotten to obliterate with his pencil!”

The Book Buyer, meanwhile, had a wood-engraving made from the photo, which appeared in the October 1888 issue. It accompanied a brief biographical sketch of Pyle, all part of Scribner’s campaign to promote his Otto of the Silver Hand, which came out that November (not to mention his The Merry Adventures of Robin Hood and Within the Capes). Later, Scribner advertised that artist’s proofs of the portrait could be had for twenty-five cents and “Special Artist’s Proofs on India Paper” for fifty cents.

Pyle liked this engraving. In a letter of August 12, 1892, he said to Frank Nelson Doubleday (who also asked Pyle for a picture of himself for use in another project): “I think the portrait that you used in the Book Buyer is about as good as any that I have had taken - I suppose because it flatters me not a little.” See for yourself... 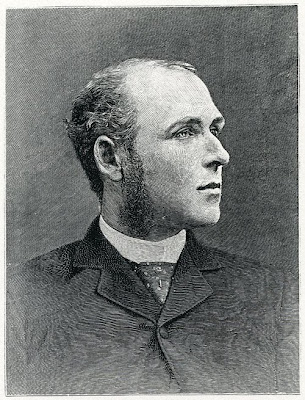 And here’s the article from The Book Buyer...

Howard Pyle began his career as an author under somewhat unusual circumstances. A number of years ago he heard of an island off the coast of Virginia where a peculiar breed of ponies ran in a semi-wild state. He visited the place, and wrote a paper upon it which he sent to Scribner's Monthly.

Following the advice of friends, who saw in this article the promise of better things, Mr. Pyle came to New York, and began to work with both his pen and his pencil. He had inherited from his mother a taste for both art and literature; and she, being a large reader of lighter literature, and a critic of keen perceptions, cultivated and directed this taste, thus exerting a marked influence in the formation of her son's intellectual character.

After coming to New York Mr. Pyle did a considerable amount of work more or less obscure, until finally he caught the attention of his brother artists by a more serious drawing than any he had yet undertaken. This was called “Wreck in the Offing!” and represented the interior of a life-saving station of the old style. A fellow in oil-skins and sou’wester has just flung open the door, in a gust of wind and rain, and shouts to his companions the startling words which form the title of the picture. This drawing was published as a double-page engraving in Harper’s Weekly, and brought Mr. Pyle at once into prominence.

Of late Mr. Pyle has been directing his attention more and more to book-making, writing and illustrating his own stories, and bringing all parts of the book into the closest harmony with the spirit of the tale. Being something of a bibliophilist, Mr. Pyle finds the creating of books to be, without question, his most congenial occupation. He has rarely painted for exhibition. The first book in which his skill as a story-teller and his talents as an illustrator became conjointly apparent was “The Merry Adventures of Robin Hood,” published by Charles Scribner's Sons in 1883. His next book, a romantic sea story called “Within the Capes,” published by the same firm in 1885, was without illustrations. Following these two were “Pepper and Salt” (1886), a collection of fanciful tales and verses, and “The Rose of Paradise,” and “The Wonder Clock,” which were published by Harper & Brothers under date of 1888. Mr. Pyle's latest illustrated book is a romance of mediaeval Germany, entitled “Otto of the Silver Hand,” which is now in the press of Charles Scribner's Sons.

In 1879 Mr. Pyle returned to Wilmington, Del., where, by the way, he was born in 1853; and since then he has made his home there. He is a hard, though not a rapid, worker, and has won distinction as an illustrator by reason of the serious, earnest spirit that characterizes his drawings. He seems to have aimed for accuracy rather than for effect, as if with the idea that there should be more in a drawing than merely that surface work which tickles the fancy at the first glance, but stimulates no deeper train of thought. He has been especially successful in his representations of colonial life and mediaeval folk-lore.

Posted by Ian Schoenherr at 8:01 PM