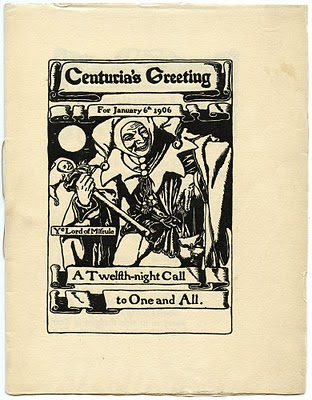 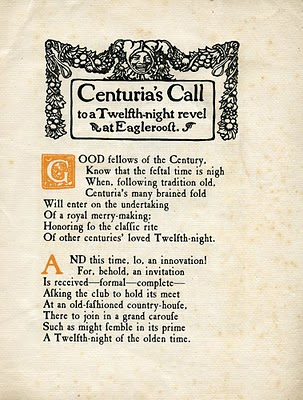 In 1904 Howard Pyle was elected a non-resident member of New York City’s prestigious Century Association - his name having been proposed by publisher J. Henry Harper and seconded by painter John White Alexander. Late the following year, Pyle was asked to design the invitation and program for the club’s traditional Twelfth Night celebration, to be held on January 6, 1906.

Either out of his own enthusiasm, or a desire to impress his fellow members, Pyle turned what should have been a quick and casual job into something much more ambitious. “I am afraid you are taking the Twelfth Night drawing too seriously,” warned his friend Frank Millet, who was coordinating the project (and who later went down with the Titanic):


The committee is very anxious to have something to send out with the notices which must be issued soon and they do not expect an elaborate work nor would they desire to give you much trouble about it.... Dr Curtis apparently dreams of something which in a few lines of the pencil will illustrate fully his description of the revels at Eagle-roost. But you can see from the old programs I sent you that elaboration is not necessary.


Millet wrote that on November 19, 1905, but I gather it was too late for Pyle to rein himself in. The invitation (which was also issued in grey-blue wrappers) and the program were printed under his supervision by John M. Rogers on Orange Street (“opposite the Old Malt House,” reads the colophon) in Wilmington, Delaware. Rogers had, among other things, printed Pyle’s Catalogue of Drawings Illustrating the Life of Gen. Washington and of Colonial Life, The Ghost of Captain Brand, and The Divinity of Labor - all in 1897 - and The Constitution and By-Laws of the Howard Pyle School of Art in 1903.

In addition to the drawings, Pyle did all the lettering seen here, except for the verse stanzas in “Centuria’s Call” and the portion of the paragraph beneath “The Programme of the Festival”: these were set in Fifteenth Century (later known as Caslon Antique), which Pyle began to use almost as soon as it was issued by the type foundry of Barnhart Brothers & Spindler.

And yet, for all his work, Pyle may not even have attended the Twelfth Night festivities: instead, he may have gone to the Franklin Inn Club’s dinner - for which he had also decorated the program cover - held the same evening in Philadelphia. 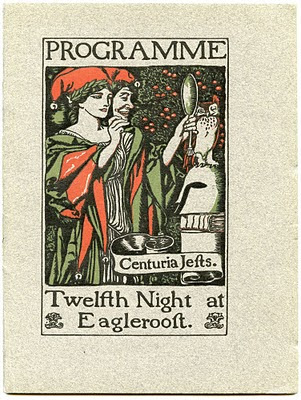 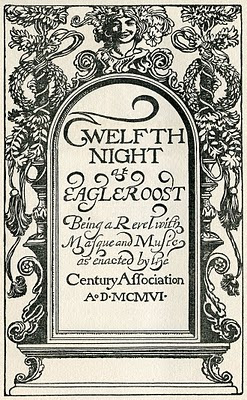 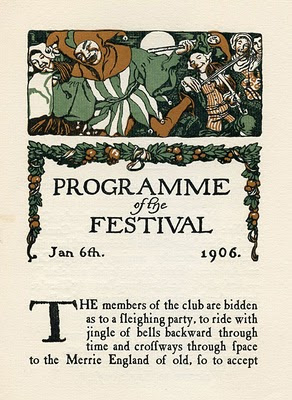 Posted by Ian Schoenherr at 5:21 PM

No wonder Pyle was considered part of the Golden Age of Illustrators - he was good with lettering and artwork.