“Looking into the Prussian Lines...” 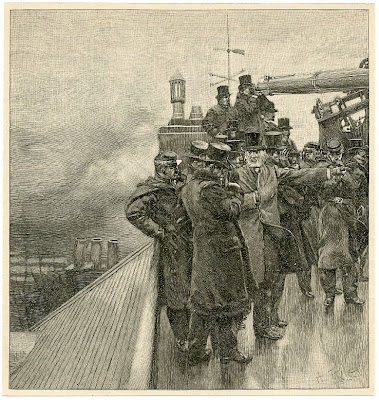 Speaking of Howard Pyle’s penchant for nicely unexpected grouping, here’s another example. He painted it in the fall of 1886 for E. B. Washburne’s “The Siege and Commune of Paris” (Scribner’s Magazine, February 1887). Pyle could do such amazing things inside the confines of a square (or almost a square).

“Looking into the Prussian Lines from the Château de la Muette” illustrates the following passage taken from the diary Washburne - then President Grant’s Minister to France - kept during the Franco-Prussian War:

This is the day of the great sortie. At this hour nothing is known of results, but it has undoubtedly been the bloodiest yet seen about the walls of Paris. The great fighting seems to be between St. Cloud and Versailles, or rather to the north of St. Cloud. It is said, however, that other parts of the Prussian lines have been attacked also, but I hardly believe it; but the attack has been terrific on St. Cloud. At 2.30 p.m. Colonel Hoffman and myself went to the Chateau de la Muette, in Passy, which is the headquarters of Admiral de Langle. This is a historic chateau once owned by the Duke of Orleans, Philip Egalite, and where he held high carnival. Nature made it a magnificent spot, elevated and beautiful, and it was adorned by everything that money and taste could supply. It is now owned by Madame Erard, the widow of the celebrated piano manufacturer. From the cupola of this chateau is the most magnificent view on that side of Paris, and it was there that we went to look through the great telescope into the Prussian lines. We found there M. Jules Favre [the bearded man, pointing], Ernest Picard, Minister of Finance, M. Durey, the Minister of Public Instruction under the Empire, Henri Martin, the French historian, and others....

Another wholly unique composition from Pyle. I love Pyle's willingness to be unconventional, and even awkward, in order to put across his expressive ideas.

I also imagine the classes he taught in "the elaboration of groups" were very interesting and informative indeed, given his mastery and innovation in that particular compositional aspect.