“Washington Firing the First Gun at the Siege of Yorktown” 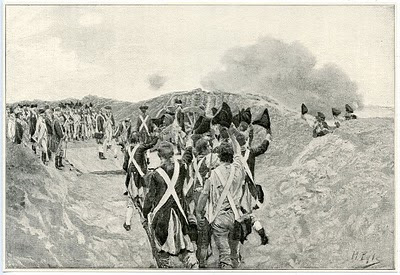 Such nicely abstract grouping by Howard Pyle here. But “Washington Firing the First Gun at the Siege of Yorktown” - the eleventh in his celebrated series illustrating Henry Cabot Lodge’s “The Story of the Revolution” - is not very well known these days. Pyle most likely painted this at Chadd’s Ford, Pennsylvania, in the summer of 1898 and it appeared in Scribner's Magazine that November. Subsequently, I assume, the full-color oil on canvas (about 36 x 24") was trundled around the country as a part of Scribner’s traveling “Revolutionary Pictures” exhibition, and perhaps it was sold somewhere along the way, since the original has yet to turn up.
Posted by Ian Schoenherr at 3:07 PM

A real beaut, innovative, deeply considered compositionally, strange and beautiful in that particularly Pyle-esque way.... I would kill to see this in color.

Thanks much for bringing this gem to light....
kev

Ain’t it though? It’s too bad that Pyle’s dreams of having the whole series hung at the Library of Congress were dashed. It would be great to look at them all together.