“I hope sometime for you to see the original”

I send you with this a reproduction of my picture of the attack upon Chew House.

It does not, of course, give any suggestion of the color - which was in cool and luminous greys - but it will at any rate indicate the arrangement of the “composition”

I hope sometime for you to see the original 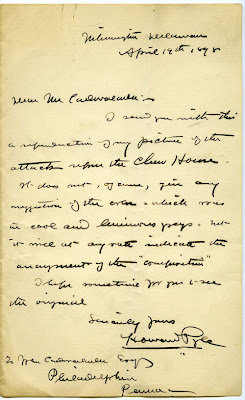 I echo Pyle’s hopes. The tiny reproduction of the picture shown here, from Henry Cabot Lodge’s “The Story of the Revolution” in Scribner’s Magazine for June 1898, does little justice to the original oil on canvas, which is indeed luminous - and big - some 23.25 by 35.25 inches.

Notes from a 1949 conversation between Pyle’s student Frank Schoonover and Pyle’s secretary Gertrude Brincklé reveal these details about the painting:


Some of Mr. Pyle’s students (including Schoonover and [Clyde] Deland) went to Germantown and photographed the house from the angle you see in the painting. On this side of the steps where the men are standing there was a green bench with flowerpots on it. The students told Mr. Pyle about it, and he said that was a good idea, and that if it were there at the time the photograph was taken, it would probably always be there - even at the time of the battle.... Some of the students posed for the painting, Mr. Schoonover included.

Pyle most likely painted the picture in March 1898. He then put it on view, briefly, in Philadelphia before shipping it to New York to be photographed and engraved for the magazine. After his hopes that it and the other eleven pictures in the series would be purchased and hung in the Library of Congress were dashed due to some legal technicality, it was exhibited here and there over the next several years. In a review of a 1905 Pyle show, The American Art News said of the "The Attack on the Chew Mansion" [sic]: “The composition is excellent, and the drawing and color make it one of the finest of modern historical paintings.” Hear, hear!

“The Attack upon the Chew House” - also known as “The Battle of Germantown” - now lives at the Delaware Art Museum.
Posted by Ian Schoenherr at 9:02 AM