“A True Portrait of an Imaginary Gentleman” 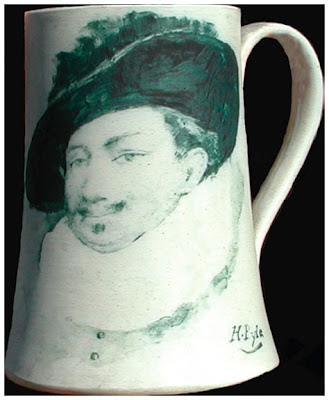 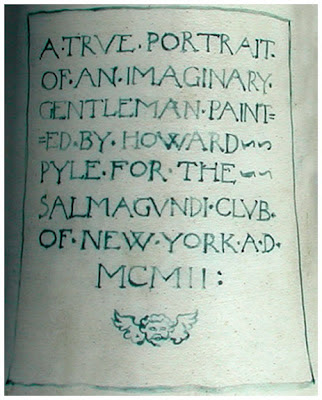 One of the more unusual pieces of “Pyleana” in existence is the mug seen here, which Howard Pyle decorated to help out the Salmagundi Club. The New York Times Saturday Review of Books and Art of April 12, 1902, explained:


The recent library dinner at the Salmagundi Club and the sale of ex libris mugs that followed the dinner constitute an annual function notable for its originality of conception and for the successful way in which a clever idea is working itself out. It was the fourth dinner at which the arbitrarily limited number of twenty-four mugs, decorated by well-known artists and numbered and registered in the library of the club, was sold at auction for the benefit of the library.

The painter Bruce Crane (who knew Pyle since the late 1870s, apparently) served as the auctioneer and, the Times said, “charm[ed] the money from the bidders’ pockets.”


The mug signed by that accomplished illustrator, Howard Pyle, brought out some lively bidding before it was secured by Mr. W. E. Baillie of Bridgeport. Quite properly Mr. Pyle’s mug showed a literary as well as an artistic side. A pleasant-faced pirate in a dark sombrero was described opposite in a panel of quaint lettering as “The [sic] true portrait of an imaginary gentleman painted by Howard Pyle for the Salmagundi Club of New York, MCMII.”

Pyle’s mug, which is just shy of six inches in height, went for $100 and has since found its way to the Delaware Art Museum. It’s a nice little painting, but Pyle didn’t think much of it, as seen in this scrawling letter to William Henry Shelton, artist, club historian and member of the Library Committee. 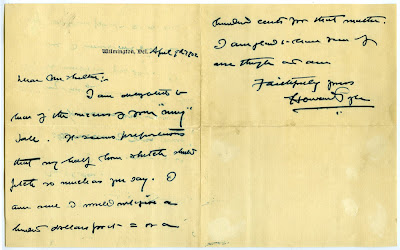 I am delighted to hear of the success of your “mug” sale. It seems preposterous that my half hour sketch should fetch so much as you say. I am sure I would not give a hundred dollars for it - or a hundred cents for that matter. I am glad to have been of use though and am

But Pyle was of use at least once more: the mug he contributed to the 1906 club fundraiser sold for $260. I can only hope that it didn’t get broken or wind up in somebody’s dishwasher and that it’ll turn up one day.
Posted by Ian Schoenherr at 9:12 PM