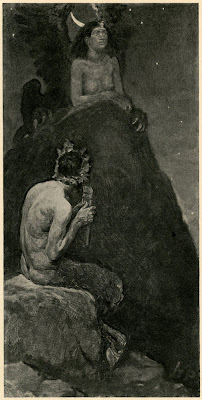 Howard Pyle made the illustration shown here for William Dean Howells’ “Stops of Various Quills” in Harper’s New Monthly Magazine for December 1894; it appeared in the book of the same name, which Harper & Brothers published - and which Pyle illustrated in full - the following fall. On October 30, 1895, Pyle wrote to Howells:


I am very proud of our book, a half dozen copies of which Harpers have just sent me. I arranged with them to return the picture of the Sphynx. I remember you expressed yourself as liking it rather much, and so, I think, as you inspired the picture, it should be yours. Accordingly I shall have it framed tomorrow and send it on to you as some token of the pleasure I had in illustrating your poems.


I sent you yesterday, by express, my picture of the Sphynx which I want you to keep for my sake.

It seemed to me that, in your poems, the piping Pan of your soul went up into just such twilight altitudes as I have tried to depict; and hearing the sudden dim rustle of wings, turned so to see his Sphynx crouching where she had not been before.

I want you to have the picture for that reason too.

Howells later mentioned the painting in a July 9, 1903, letter to Pyle: “I have turned a barn into a library here” - in Kittery Point, Maine - “and I wish you could see how I have placed that rich gift of yours...”

I doubt Pyle ever saw it, though. And I’ve been trying to find a photo of the painting hanging on the wall there, but so far I’ve come up short. However, I did find a snippet from the Mark Twain Quarterly (or Journal) of 1936, which says of Howells:


He stood benignly before a painting by his friend, Howard Pyle, who had given him the original of a famous book-illustration. He was as proud as a child to have on his study wall a painting by this artist.

Ian, you have woven together a number of fascinating bits of information into a compelling story of Pyle's generosity.