“A mug, a pipe and a pleasant Friend or two” 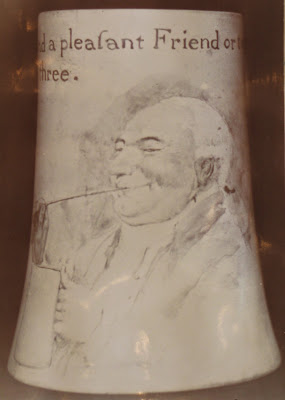 In his 1918 history of New York City’s venerable Salmagundi Club, club librarian William Henry Shelton recalled a proposal he had made at the turn of the last century “which was the beginning of one of the most interesting customs of the club and one which has furnished the library with an ample income from that day to this.”


The idea suggested was that twenty-four mugs or steins be decorated each year and sold at auction at the library dinner for the benefit of the library. Each member of the club at that time had his own private mug, decorated by himself, or for him by a professional friend, with his name burned in under the glaze at the Volkmar Pottery. These suggested the library mugs, and limiting the yearly output for the library sale was a plan to keep up prices.

Although Howard Pyle was not a particularly active Salmagundian, he decorated at least two such mugs, the first in 1902 (which I discussed here) and the second on Saturday, December 30, 1905. We know the exact date because he hand-lettered it thus:

It’s not clear, however, if Pyle did his decorating at the club itself or in Wilmington and then shipped the unfired mug to New York, just as Edwin Austin Abbey (and perhaps other out-of-town contributors) had done. Pyle may well have been in New York that day - either to lecture at the Art Students’ League, and/or to hammer out his plan to take over McClure’s Magazine’s art department - but I have yet to find corroborating evidence.

At any rate, the mug was finally auctioned off on April 17, 1906. Shelton remembered:


There was a sharp contest in the bidding for the Abbey mug and also for a mug by Howard Pyle. Mr. George A. Hearn had sent in a bid of two hundred and fifty dollars for the Abbey mug. The two coveted pieces of delft, however, went into Mr. Saltus’s collection, the Abbey for four hundred and sixty-one dollars and the Pyle for two hundred and sixty dollars. This was real bidding, which was not always the case, as, for instance, in the following year a mug decorated by F. Luis Mora sold at the dinner-table for five hundred and five dollars. This was a sum sent over by Mr. Saltus, who was then in Nice, with the simple direction, “Buy me a mug.” He wished to place that sum in the library and he wished to do it in his own way. As it was known that he always wished his undivided contribution to be expended for one mug, it was the custom to begin the sale by offering the first choice, and when these large sums had to be expended on one mug there was an amusing competition of irresponsible bids, by such of us as were in the secret, until the desired sum was reached.


A syndicated news item about the sale noted that “Mr. Howard Pyle’s mug shows the fat and rosy face of an old time drinker and smoker.” And The New York Times of April 18, 1906, said, “Howard Pyle’s contribution shows the round, rosy face of a high roller of olden days, who looks as if he enjoyed his pipe and the flowing bowl.”

A number of the mugs J. Sanford Saltus purchased were given back to the club, but this one fell through the cracks and its present whereabouts are a mystery. Let’s just hope it didn’t fall on the floor.

The photo above - from the Salmagundi Club’s mug record book - is the only one that I’ve seen.
Posted by Ian Schoenherr at 5:42 PM

"Until the desired sum was reached" -- OMG, bidding in collusion ain't so recent as I thought.