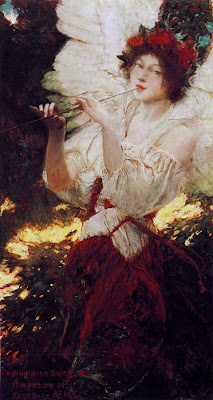 “As you know,” said Howard Pyle to the sculptor Augustus Saint-Gaudens in a letter of January 2, 1902, “I have always admired your work extremely - have always considered you as a representative of that steadfast and lofty effort toward an Art that cannot condescend to tricks and effects to catch the eye, but that speaks with a deeper intonation to the hearts and the souls of men.”

Saint-Gaudens seems to have felt much the same way about Pyle, and for several years the two had intended to exchange works. Finally, at the end of 1901, the sculptor sent a bronze cast of the “Head of Victory” - a “sketch” for the allegorical figure in his wonderful Sherman Monument. 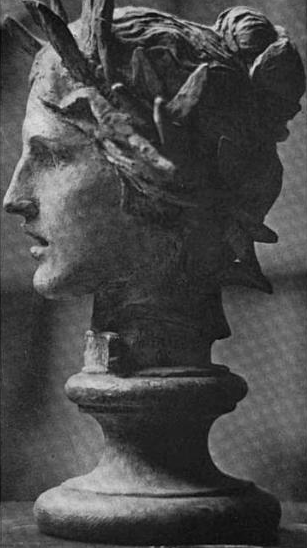 “Head of Victory” by Augustus Saint-Gaudens

Pyle received the piece on January 2. “I shall regard it as one of the treasures of my life,” he wrote the same day. “I care for it much more than I should for a more finished work; it is, as it were, a pure and noble thought from a large, and I am sure, a noble mind.” He also vowed to send “something in return that shall represent an earnest, even if an inarticulate effort of my Art.”


Now that it has been sent I feel horribly conscious that it is no adequate return for the beautiful “Victory” which I possess. The only thing that reconciles me to it is that it is sent with the most friendly good wishes in the world. Moreover, whatever its short-comings it is a sincere effort to express a thought.

“A Dream of Young Summer” wasn’t a custom-made piece, but something Pyle already had on hand: it had been published the previous year, in Harper’s Monthly Magazine for June 1901, accompanied by Edith M. Thomas’s poem of the same name (which may have been written for the picture, instead of the other way around - but I’ll explain myself in a later post, I hope).

The painting - which, by the way, Pyle and inscribed “To Augustus Saint Gaudens this Picture of Young Summer with the Fraternal Greetings of His Brother in Art” - eventually wound up in the hands of Pyle’s grandson, who presented it to the Brandywine River Museum, where you can see it today.

Unfortunately, I don’t know where Pyle’s particular copy of the “Head of Victory” is, but it was the topic of this news item in The Evening Journal of Wilmington in March 1904:

A great many people of Wilmington have doubtless seen the equestrian statue Sherman that stands in the Plaza at Fifth avenue in New York, for that work is not only local but national and it is, moreover, regarded by those who should know as being one of the five great equestrian statues of the world. Perhaps the finest part of the entire group is the figure of Victory and it is rather interesting to know that the study for the head, cast in bronze, is now in possession of an artist in Wilmington to whom it was given by Saint-Gaudens.


Mr. Pyle has gone to Chicago today to lecture, etc. Enclosed you will find a photo of him. The cast is a head St. Gaudin’s [sic] gave him. He had a photo taken of it so as to use it in an illustrated lecture in Chicago and Milwaukee. He considers the piece of sculpture (original study for the figure of “Victory” on the Sherman Statue, NY) a masterpiece.