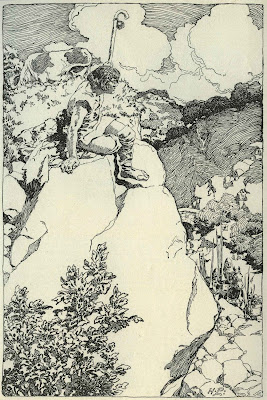 Pardon the clickbait title, but I couldn’t resist after yesterday’s “news” that a “lost” Sherlock Holmes story “by” Arthur Conan Doyle had come to light. Fortunately, last night, Mattias Boström, a bona fide Doyle scholar, wrote an article which dismantled the hastily made claims. (Before being eclipsed by Howard Pyle, Doyle and Holmes were the objects of my obsession, and I still dip into their worlds from time to time.)

Now, about “A Forgotten Tale” by Arthur Conan Doyle...

It was a poem, not a tale per se, and it has no Sherlockian content. Evidently, Dr. Doyle (as he was often referred to, then) wrote it not long before he visited the United States for the first time, in 1894. In fact, the manuscript of “A Forgotten Tale” seems to have sailed from England just a few weeks - or even days - before the doctor himself did: Scribner’s Magazine accepted it on September 27, 1894, and Doyle arrived in New York on October 2nd. As the poem was scheduled to appear in the January 1895 issue (which would be on the newsstands by mid-December), Scribner’s must have commissioned Howard Pyle to illustrate it almost immediately.

I assume Edward L. Burlingame, editor of Scribner’s Magazine, communicated by letter or in person with Doyle about the poem - and possibly its illustrations. He may even have put Doyle in touch with Pyle, seeing as he had done just that with Rudyard Kipling regarding Pyle’s illustrations for “McAndrews’ Hymn” [sic] - soon to be printed in the December 1894 Scribner’s. Then again, Kipling had asked outright “if you could kindly place me in communication with your artist as it is possible that he might see his way to using some of my suggestions.” But Doyle may not have cared as much, or at all, about the pictures for “A Forgotten Tale”.

And, unfortunately, there’s no paper trail to answer that question. I hunted extensively through the Scribner Archives at Princeton and found nothing. Equally frustrating is that, when Doyle arrived, Pyle may very well have been in the midst of - or had recently finished - illustrating Doyle’s “The Parasite” for Harper’s Weekly, which was to appear in four installments (and in book form) while Doyle was in the United States! There, too, however, I have yet to find any correspondence between Doyle and Pyle or Harper & Brothers concerning the project.

What’s also maddening is that, during his travels, Doyle met “Howells, Cable, Eugene Field, Garland, Riley” - all of whom Pyle had met, and some of whom he knew very well - and was feted again and again by folks in Pyle’s social or professional circles. And, lo and behold, Doyle and Pyle were even in Philadelphia on the same day! Saturday, November 10, 1894, found Pyle lecturing at the Drexel Institute that afternoon and Doyle lecturing that evening - but, again, who knows if they encountered each other, or if Pyle attended the Doyle event?

And later, after Doyle spent Thanksgiving with Kipling in Vermont, he wrote to his mother, “Have you read his poem, McAndrews Hymn, in Scribner’s Xmas number. It’s grand!” But God forbid he should say anything about Pyle’s illustrations. Pyle, meanwhile, must have written down something about Doyle’s writings, but so far nothing has surfaced. I’ll keep looking.

If Scribner’s Magazine accepted “A Forgotten Tale” on September 27, 1894, they probably didn’t get Pyle on board for upwards of a week or more. And as the printed magazine would need to be out in mid-December (and factoring in time before that to prepare photo-engraved plates of the illustrations), it’s safe to say that Pyle made his drawings sometime between mid-October and late November 1894 - all the while Doyle was travelling across the United States.

I have to admit that I’ve never been overly fond of Pyle’s “A Forgotten Tale” pictures. The first one feels too Daniel Vierge-like: but Pyle may have deliberately tried to inject some “Spanish” flavor into it, since the poem is set in Mediaeval Spain. And the second drawing is somewhat hampered by the backlighting. Then again, Pyle’s pen-work was in a sort of transitional phase, and he may have done these in a hurry: he was his usual busy self, writing and illustrating, and he had also just started teaching. His original pen-and-inks haven’t turned up, by the way, nor have his oil paintings for “The Parasite”. Somehow I’m not surprised.

Anyway, after two exhausting months, Doyle sailed off on December 8, 1894. I assume Scribner’s Magazine for January 1895 was still in production at the time, but surely Doyle saw a copy of the finished product (either the American or British edition) not long after he returned home.

Incidentally, Doyle’s departure date conflicted with the Authors’ Reception at the Juvenile Order of the Round Table in New York, to which he had been invited. And who was also invited and - reportedly - attended? Howard Pyle. Of course.

In the end, since Doyle didn’t return to the States until 1914 and since Pyle didn’t go to Europe until 1910-11 - and stayed almost entirely in Italy (where Doyle wasn’t) - they never met again, if they ever met in the first place.

However, the Sherlockian in me takes some solace in the fact that while a sickly Pyle was recuperating in a Rome hotel room in December 1910, his secretary noted how he “was soon absorbed in the Strand Magazine” - the Christmas issue of which featured “The Adventure of the Devil’s Foot” by Arthur Conan Doyle. 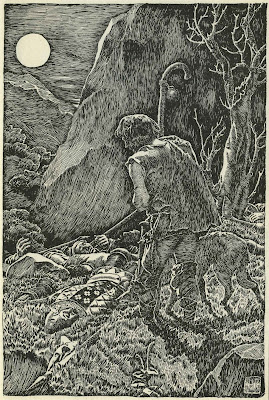 There still remains in one of the valleys of the Cantabrian mountains in northern Spain a small hill called “Colla de los Inglesos.” It marks the spot where three hundred bowmen of the Black Prince’s army were surrounded by several thousand Spanish cavalry, and after a long and gallant resistance, were entirely destroyed.


Say, what saw you on the hill,
Garcia, the herdsman?
“I saw my brindled heifer there,
A trail of bowmen, spent and bare
A little man on a roan mare
And a tattered flag before them.”

Say, what saw you in the vale,
Garcia, the herdsman?
“There I saw my lambing ewe,
And an army riding through,
Thick and brave the pennons flew
From the lance-heads o’er them.”

Say, what saw you on the hill,
Garcia, the herdsman?
“I saw beside the milking byre,
White with want and black with mire,
A little man with face afire
Marshalling his bowmen.”

Say, what saw you in the vale,
Garcia, the herdsman?
“There I saw my bullocks twain
And the hardy men of Spain
With bloody heel and slackened rein,
Closing on their foemen.”

Nay, but there is more to tell,
Garcia, the herdsman.
“More I might not bide to view,
I had other things to do,
Tending on the lambing ewe,
Down among the clover.”

Prithee tell me what you heard,
Garcia, the herdsman?
“Shouting from the mountain side,
Shouting until eventide,
But it dwindled and it died
Ere milking time was over.”

Ah, but saw you nothing more,
Garcia, the herdsman?
“Yes, I saw them lying there,
The little man and roan mare,
And in their ranks the bowmen bare
With their staves before them.”

And the hardy men of Spain,
Garcia, the herdsman?
“Hush, but we are Spanish too,
More I may not say to you,
May God’s benison, like dew,
Gently settle o’er them.”
Posted by Ian Schoenherr at 1:52 PM

Hadn't seen these before either. Such a pleasure.

Apart from reading someplace that the choice of Sidney Paget was a case of mistaken identity, is there any commentary from Doyle about his illustrators?

Arthur Conan Doyle did praise Paget here and there over the years. And there's an anecdote that Frederic Dorr Steele told of being at a dinner with Conan Doyle, who turned to him and said: "Young man, do you know who did the best illustrations ever made for me? Cyrus Cuneo!"