On February 13, 1884, author George Washington Cable - then in the midst of an extended stay at the Hartford, Connecticut, home of Samuel L. Clemens (a.k.a. Mark Twain) - concluded a letter to his wife with this comment:


Mrs. Clemens is reading aloud to Mark & the children Howard Pyle’s beautiful new version of Robin Hood. Mark enjoys it hugely; they have come to the death of Robin & will soon be at the end.

The Clemens children were Susy, 11, Clara, 9, Jean, 3, and the “beautiful new version” was The Merry Adventures of Robin Hood of Great Renown, in Nottinghamshire, published by Charles Scribner’s Sons just a few months earlier. The first edition was bound in full leather, embossed with Pyle’s own designs. 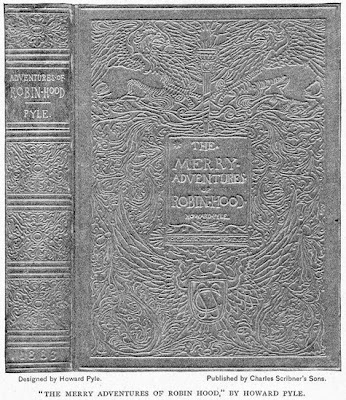 Clemens’s fondness for the book endured: on New Year’s Day of 1903, he sent what was essentially a fan letter to Pyle, saying, “Long ago you made the best Robin Hood that was ever written.”

The particular copy from which Mrs. Clemens read that winter evening might still be around: a copy owned by Clara (which also contains a bit of marginalia in handwriting resembling that of Clemens: on page 145 the word “goodliness” is crossed out and changed to “godliness”), which was subsequently presented to the actress Elsie Leslie, now belongs to the University of Texas at Austin. 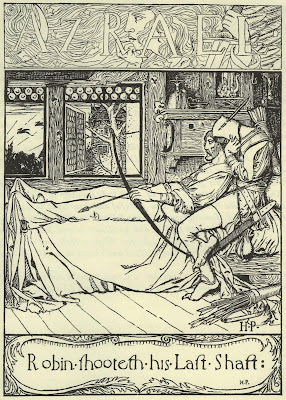 Posted by Ian Schoenherr at 6:13 PM