Another Picture for Arthur Conan Doyle 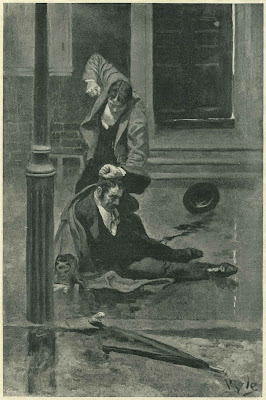 This Howard Pyle picture went untitled when it appeared in Harper’s Weekly for December 1, 1894, illustrating Arthur Conan Doyle’s The Parasite.

However, in the book version (published in mid-December 1894, after the four-part serialization) it was called “‘Struck me with both fists’” - and indeed it shows the spellbound hero of the novella, Austin Gillroy, beating the stuffing out of his friend Charles Sadler.

When the magazine showed up on newsstands - about a week before the issue date - Dr. Doyle easily could have picked up a copy himself: he was, then, at the tail end of a whirlwind lecture tour in the United States (plus a brief stop in Canada) - a trip which is thoroughly documented in Christopher Redmond’s Welcome to America, Mr. Sherlock Holmes.

But I can only speculate where Doyle was when he first saw Pyle’s picture: Schenectady, Niagara Falls, Toronto, Buffalo? Or while he was enjoying Thanksgiving with Rudyard Kipling in Brattleboro, Vermont? Or maybe when he was in Morristown or Paterson, New Jersey?

Or maybe he never saw it at all - unless Harper & Brothers sent him their edition of The Parasite with Pyle’s four illustrations. I wonder if they did - and what he thought.

As I mentioned in my previous post, no correspondence surrounding this picture - or anything regarding Pyle’s involvement with The Parasite - has been located. I still hope something will turn up. The original painting, too, is missing, though I assume Pyle painted it in black and white oil. Again, it hints at what he could have brought to illustrations of the Sherlock Holmes stories, if only Harper’s Weekly had asked Pyle to make them - instead of the lackluster William Henry Hyde. Oh well.

Now, for want of anything more to say, here is a long except of what Pyle’s picture illustrated:


...To-night is the university ball, and I must go. God knows I never felt less in the humor for festivity, but I must not have it said that I am unfit to appear in public. If I am seen there, and have speech with some of the elders of the university it will go a long way toward showing them that it would be unjust to take my chair away from me.

10 P.M. I have been to the ball. Charles Sadler and I went together, but I have come away before him. I shall wait up for him, however, for, indeed, I fear to go to sleep these nights. He is a cheery, practical fellow, and a chat with him will steady my nerves. On the whole, the evening was a great success. I talked to every one who has influence, and I think that I made them realize that my chair is not vacant quite yet. The creature was at the ball - unable to dance, of course, but sitting with Mrs. Wilson. Again and again her eyes rested upon me. They were almost the last things I saw before I left the room. Once, as I sat sideways to her, I watched her, and saw that her gaze was following some one else. It was Sadler, who was dancing at the time with the second Miss Thurston. To judge by her expression, it is well for him that he is not in her grip as I am. He does not know the escape he has had. I think I hear his step in the street now, and I will go down and let him in. If he will -

May 4. Why did I break off in this way last night? I never went down stairs, after all - at least, I have no recollection of doing so. But, on the other hand, I cannot remember going to bed. One of my hands is greatly swollen this morning, and yet I have no remembrance of injuring it yesterday. Otherwise, I am feeling all the better for last night's festivity. But I cannot understand how it is that I did not meet Charles Sadler when I so fully intended to do so. Is it possible - My God, it is only too probable! Has she been leading me some devil’s dance again? I will go down to Sadler and ask him.

Mid-day. The thing has come to a crisis. My life is not worth living. But, if I am to die, then she shall come also. I will not leave her behind, to drive some other man mad as she has me. No, I have come to the limit of my endurance. She has made me as desperate and dangerous a man as walks the earth. God knows I have never had the heart to hurt a fly, and yet, if I had my hands now upon that woman, she should never leave this room alive. I shall see her this very day, and she shall learn what she has to expect from me.

I went to Sadler and found him, to my surprise, in bed. As I entered he sat up and turned a face toward me which sickened me as I looked at it.

“Why, Sadler, what has happened?” I cried, but my heart turned cold as I said it.

“Gilroy,” he answered, mumbling with his swollen lips, “I have for some weeks been under the impression that you are a madman. Now I know it, and that you are a dangerous one as well. If it were not that I am unwilling to make a scandal in the college, you would now be in the hands of the police.”

“I mean that as I opened the door last night you rushed out upon me, struck me with both your fists in the face, knocked me down, kicked me furiously in the side, and left me lying almost unconscious in the street. Look at your own hand bearing witness against you.”

Yes, there it was, puffed up, with sponge-like knuckles, as after some terrific blow. What could I do? Though he put me down as a madman, I must tell him all. I sat by his bed and went over all my troubles from the beginning. I poured them out with quivering hands and burning words which might have carried conviction to the most sceptical. “She hates you and she hates me!” I cried. “She revenged herself last night on both of us at once. She saw me leave the ball, and she must have seen you also. She knew how long it would take you to reach home. Then she had but to use her wicked will. Ah, your bruised face is a small thing beside my bruised soul!”

Yay!! A Howard Pyle picture I had never seen before!! Yay!!

Oh good! I should do this blogging thing more often.