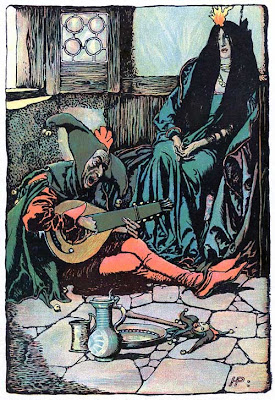 This fool - or jester, if you will - is from Erik Bogh’s “The Pilgrimage of Truth” (Harper’s New Monthly Magazine, December 1900). Its title in the magazine was “Truth in the Fool’s Lodge,” but it was also exhibited as “Truth is Received by the Jester” and “Truth in House of the the Fool.”

Howard Pyle made this during the summer of 1900, while he was living, working, and teaching at Chadd's Ford, Pennsylvania. In fact, he made at least three versions of this scene (I think I’ve only seen this one, so I don't know how the others differ) as he struggled to find a medium which could be reproduced successfully. “I have had great difficulty with the Christmas work I am doing for Harpers,” he grumbled on August 3th. “It will have to be redrawn and will occupy me I think almost the entire month to finish the work.” And on September 7th he was still cranky: “The Christmas pictures, which were delaying me, took so much longer for me to do than I had expected that I am thrown back nearly a month in my work.”
Posted by Ian Schoenherr at 3:55 PM