“In the Reading-Room” at Sotheby’s 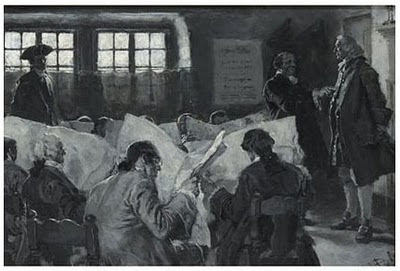 “In the Reading-Room” by Howard Pyle will be auctioned at Sotheby’s in New York City on Wednesday, September 29, 2010. It comes from the massive James S. Copley Library, which has been sold in parts over the past few months. The subject must have appealed to Copley, a newspaper man, who may have acquired it in the 1960s from Helen L. Card, successor to E. Walter Latendorf, who had it in 1950.

As do a number of Pyle’s pictures from the late 1880s, this one features a sort of microcephalic gentleman with large feet. Not sure why Pyle fell into this trend, but I’m on the case.

You can zoom in and really study Pyle’s confident brushwork here.
Posted by Ian Schoenherr at 1:51 PM