I have it on good authority that this well-known snapshot of Howard Pyle was taken 100 years ago today. The photographer? Paul Strayer (1885–1981), a young Chicago artist, who had made a “pilgrimage” to Pyle’s Wilmington studio. Other photographs from this day show that Pyle, Stanley Arthurs, and Frank Schoonover were still hard at work on the enormous “Life in and Old Dutch Town” mural for the Hudson County Court House - which had just officially opened.

In a 1947 letter to Gertrude Brincklé, Strayer recalled his visit: how he had brought along a bound collection of Pyle’s illustrations; how Pyle sat down at a round Colonial table and slowly went through the volume, commenting on the pictures; and how, when he got to the end, Pyle asked, “Would you like me to draw a little picture in it for you?” and on the fly-leaf drew the head of a 17th Century cavalier (a common Pylean “doodle”) and signed it, “Howard Pyle, September 21, 1910.”

In 1953, Strayer - perhaps commemorating the centennial of Pyle’s birth - painted the portrait below, based on the snapshots he had (allegedly!) taken 43 years earlier. 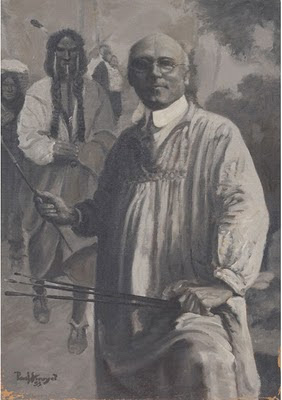 Posted by Ian Schoenherr at 1:42 PM