I’m interrupting my planned follow-up post to present this...

Today is the 139th anniversary of the first known appearance in print of a Howard Pyle work. He made this rather crude drawing for the masthead of the inaugural issue of Every Evening, a Wilmington newspaper, and it was featured for the next two years.

As far as I know, Pyle, out of embarrassment or forgetfulness, never mentioned it later in life and it eluded the otherwise 90+ percent comprehensive bibliography assembled by Willard S. Morse and Gertrude Brincklé in 1921. It was credited, however, otherwise it’s creator would never have been known: 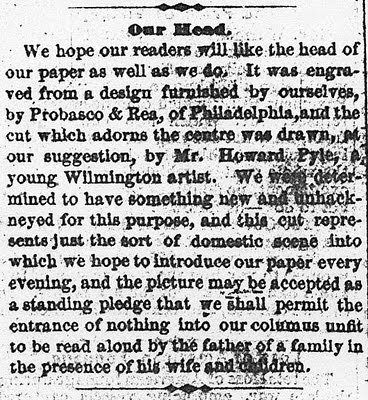 And, as luck would have it, it also garnered the first known critical review of a Pyle work. The following appeared in the issue of September 6, 1871: 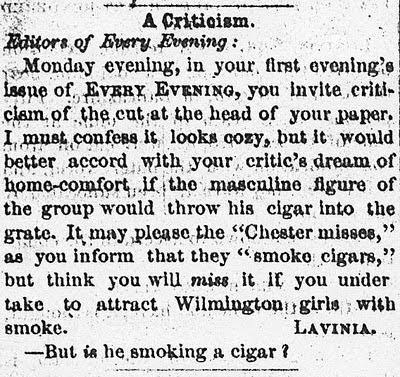 As the editor helpfully noted, “But is he smoking a cigar?” Lavinia, it seems, misread the father’s handlebar mustache.
Posted by Ian Schoenherr at 6:40 PM

Email ThisBlogThis!Share to TwitterShare to FacebookShare to Pinterest
Labels: 1871, Every Evening, youth